Tulane University will host the National Institute on Aging Director's Regional Meeting on Aging Research on Tuesday, April 14, as the institute seeks to stimulate new investigations into age-related disease, says S. Michal Jazwinski, director of the Tulane Center for Aging. 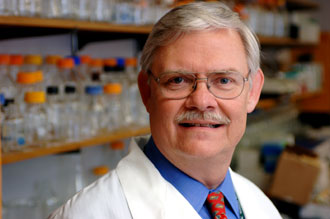 Research on aging issues will be on the upswing at Tulane, says S. Michal Jazwinski, who holds the John W. Deming, MD Regents Chair in Aging, and is director of the Tulane Center for Aging. (Photo by Paula Burch-Celentano)

The meeting will be held at the Tulane University School of Medicine, 1430 Tulane Ave., Room 6065.

A prime concern of the National Institute on Aging is to stimulate new research on aging, according to Jazwinski, who also is a professor of medicine and biochemistry.

The upcoming meeting is targeted at faculty and students from Louisiana, Texas, Arkansas and Alabama who potentially could initiate research into aging, Alzheimer's Disease, health disparities among older adults, and many related issues.

“The idea here is the NIA wants to stimulate research in its portfolio,” says Jazwinski. “It wants to encourage people to apply and it wants to provide the information that people need to be able to tailor their research programs to fit the goals of the institute.”

Representatives of the divisions within the National Institute on Aging will discuss their respective areas of concern with attendees at the meeting.

The session also will touch on new science initiatives in aging. The featured speakers will include Dr. Monique G. Cola, assistant professor of neurology at Tulane University School of Medicine, who will discuss her research on brain changes during aging.

Jazwinski is optimistic that research into aging will be on the increase at Tulane.

“The Tulane Center for Aging now has a total of 35 faculty members, at all the campuses  uptown, downtown, as well as at the Tulane National Primate Research Center,” he says. “These individuals span a very broad range of disciplines, but they are all interested in aging. What I hope this Regional NIA Director's Meeting will do for us is to spur interest and activity in terms of our scientists here at Tulane submitting grant applications for research to the National Institute on Aging.”

A second session of the meeting will be hosted by Xavier University on April 15 at the University Center, third floor Ballroom A&amp;B.

No fee is charged for the sessions, but registration is required by Friday (March 27) for attendance. For more information and to register, e-mail Andrea Griffin-Mann of the National Institute on Aging or call her at 301-496-0765.