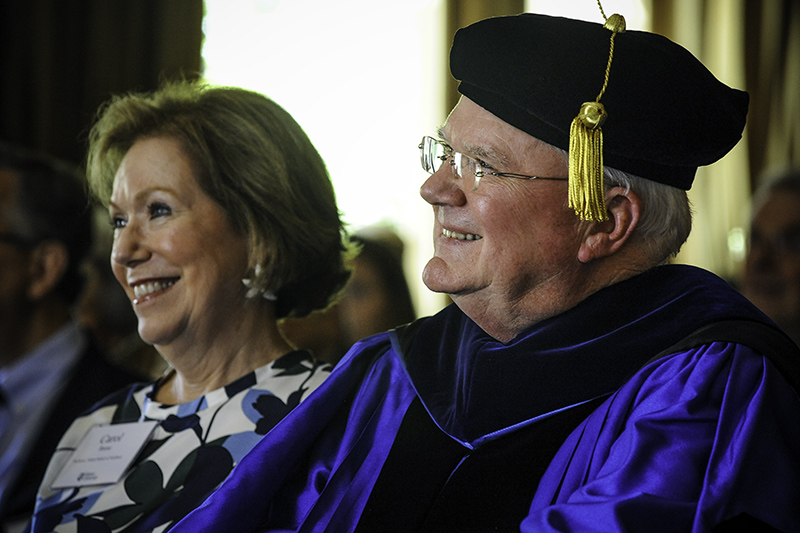 Tom Reese, professor of art history and executive director of the Stone Center for Latin American Studies, was formally installed as the first Thomas F. and Carol M. Reese Distinguished Chair in Latin American Studies on April 22. Carol Reese is Favrot Professor of Architecture in the Tulane School of Architecture. A gift from an anonymous donor endowed the chair in perpetuity for future executive directors of the Stone Center.

The endowed directorship strengthens the Stone Center’s financial position for recruiting future leaders and also allows the center to expand its academic and research programs and operations.

“Carol and I are deeply honored and humbled by the fact that this distinguished chair carries our names and that I am today being installed as its inaugural chair holder,” Tom Reese said at the investiture ceremony, noting that it marks a period of growth and accomplishments at Tulane.

Latin American Studies began at Tulane with the founding of the Middle American Research Institute in 1924. Today, the Stone Center enrolls about 90 undergraduate majors and minors and 47 graduate students. It is one of only a few continuously funded U.S. Department of Education Title VI National Resource Centers on Latin America since that government program began in the 1960s.

A New Orleans native, Tom Reese graduated from Tulane in 1965, having majored in art history and Spanish. He joined the Stone Center as executive director in 1999. Carol Reese joined the School of Architecture faculty also in 1999.

“Their joint devotion to [Latin American studies] has ensured that Tulane’s long tradition of scholarship in that field could be capitalized upon and raised to new heights,” said Yvette Jones at the investiture event.

The endowment is part of a larger gift to the Stone Center; the total gift includes endowed chairs in honor of former president Scott Cowen and his wife, Marjorie, and an endowed fund for Latin American Special Collections in honor of Yvette Jones, executive vice president for university relations and development at Tulane.