Belgin Erten, an undergraduate student of evolutionary biology and public health, recently got a firsthand look at the effects of a nationwide tobacco smoking ban in Turkey. Just months after the passage of the a law that banned smoking in all indoor public places in 2008, Erten interned at the Hacettepe Medical School in the capital city of Ankara. There, Erten not only attended graduate-level public health classes but also conducted an independent study on smoking and the female population in Turkey. 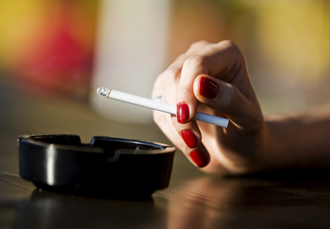 Women are becoming more independent in Turkey but this may lead to an increase in female smoking, says Tulane undergraduate Belgin Erten, who studied the topic during an internship in Turkey. (Photo from iStockphoto.com)

“Women are increasingly playing a major part in the tobacco-reliant Turkish culture, possibly as a by-product of their increasing independence,” says Erten, whose study was published in the Turkish Journal of Cancer.

Erten is no stranger to the country. Both her father's and mother's parents were born in Turkey. Many of her relatives still live there, and they made her aware of the internship opportunity.

Under the mentorship of Dilek Aslan, professor and head of the smoking prevention program at the medical school in Turkey, Erten and other interns distributed questionnaires around the surrounding community to determine citizens' smoking patterns and their opinions about the smoking ban.

“The smoking ban was a huge step forward for Turkey,” says Erten, noting that the country has one of the highest smoking rates in the world. “It means that the issue is finally being tackled, which is great. Surprisingly, many people do support it and want it to work. They're starting to realize the dangers of secondhand smoke.”

According to Erten's research, the number of female smokers in developing countries is predicted to reach 259 million in 2025, an increase from 218 million in 2000. Erten hopes that the new law will contribute to a decrease in smoking rates among women in Turkey.

“Children and women in Turkey have been new targets of the tobacco industry for a couple of decades now,” says Aslan, noting that the country has one of the highest smoking rates in the world. “Their basic tactics for introducing tobacco use to females equate smoking with attractive themes like 'independency,' 'slimming down,' and 'gaining equality with men.'”

“Tobacco industries are taking advantage of this cultural change and directing advertisements solely to women. In the future, there must be strengthened efforts in protecting developing countries from the tobacco industry's new found interest in them.”

Erten plans to graduate with a bachelor's degree in evolutionary biology with a minor in public health in May 2011.

Laura Post is communications coordinator in the School of Public Health and Tropical Medicine.