The campus Juggling Club apparently prefers to have several balls in the air at once. Along with holding meetings in which members gather to toss bowling pins and plastic balls, the group is taking on a new responsibility  adding foliage to bare campus lawns. 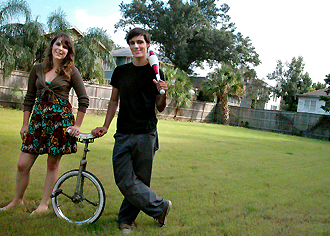 “It all started off as a joke, and then we became very serious about our joke,” said club president Philip Schapker, a junior from Kansas City who is majoring in ecology and evolutionary biology and anthropology. “At one of our meetings we were throwing ideas around and someone said that we should start planting fruit trees around campus.”

Not long after that meeting, Schapker took the idea to Steven Darwin, a professor in the Department of Ecology and Evolutionary Biology, who connected the students with the superintendent of campus grounds. The group is now targeting a vacant lot behind Wall Residential College for the garden.

“I met Philip through my Plants and Human Affairs course, where we discussed some cultural influences of gardens and cultivated plants,” said Darwin. “I put him in touch with the appropriate Tulane departments, but it's been the enthusiasm and commitment on the part of the students that's moved the project forward.”

Rachel Nelson, of Albany, N.Y. is a public health major and the Juggling Club's “minister of agriculture.”

Nelson, who is a novice juggler, said she spends a lot of her club-related time researching how other community gardens are developed and sustained. She's also becoming a better juggler, notes Schapker.

Ideally, she added, other student organizations will want to join the project. “In their space they'll be able to plant things like vegetables, fruit and flowers,” said Nelson. “That way everyone will get to be a part of the garden and it won't be just a Juggling Club thing.”

According to Schapker, the cost of filling the lot with gardening soil is approximately $11,000, most of which will come from the organization's budget and, the group hopes, through student government funding.

This fall, the group was awarded a Clinton Global Initiative University Outstanding Commitment Award in the amount of $2,500 for use toward the garden's infrastructure.

Schapker, who also promotes his interest in bicycling under the umbrella of the Juggling Club, says that club members joke that the organization comprises a kind of “bohemian triumvirate,” adding that the pursuits of juggling, cycling and gardening all tend to attract creative people with interesting outlooks on life. “Joining creative forces into a colloquium where expression of absurd and grand visions is explicitly encouraged has allowed us to accomplish a lot more in a shorter time than I think we would have separately.”