Their bodies extended in awkward positions and their gazes fixed pensively on the wall, Tulane students in mural drawing and painting class are creating a panoramic vision of Louisiana in one broad corridor of the Benjamin Franklin Elementary Mathematics and Science School. 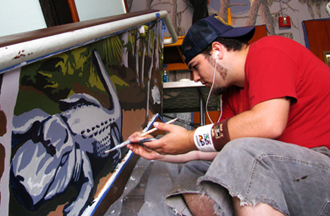 Tulane senior David Lindsley adds finishing touches to an alligator in the mural at Ben Franklin Elementary School. He and his classmates are in a mural drawing and painting class in the Newcomb Art Department. (Photos by Aryanna Gamble)

Inspired by the positive effect of public murals in cities such as Philadelphia and Cincinnati, Newcomb Art Department faculty members Adam Mysock and Ronna Harris guide their students with a knowledge and enthusiasm that has motivated many of them to spend their off hours and weekends at the school.

But the mural belongs, first and foremost, to Ben Franklin Elementary, whose walls it will adorn for years to come. Its students provide creative input, and its faculty, approval of the final product.

“One of the challenges,” Mysock says, “was leading [members of Franklin community] to their theme, without asking for it outright.” The course teaches Tulane artists how to assess the sensibility and outlook of a community and express its unique voice through a collaborative artistic vision.

Leading the project are Mysock, a professor of practice, and Harris, an associate professor in the art department.

The walls of this welcoming stairwell and that of an upstairs classroom serve as blank canvases for the students. The hallway that connects the two sites is the workshop of colors for Mysock and Harris, while the landing at the top of the stairwell is their podium. Each class is a product of learning and doing, first attempts and finished projects, as is a completed mural.

The inquisitive young eyes of the Benjamin Franklin students who chose the mural's theme saw Louisiana in terms of its wetlands  a region that, like New Orleans, is known for its intense diversity, vibrant scheme of colors and vigorous pulse of activity.

“It was totally their idea,” says William Caruthers, one of the muralists, of the Franklin students. “And they're the real experts, too, believe me.” A junior sculpture major at Tulane, Caruthers joins his classmates in receiving service-learning credits through the course. 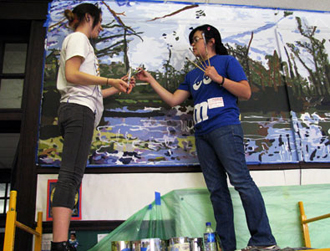 Lauren Mollin, left, a first-year student, and Victoria Le, a sophomore, work on the mural depicting Louisiana wetlands. The students receive both class credits and service-learning credits for the community project.

MiWha Fontenot is Benjamin Franklin's faculty coordinator for the mural project and the person responsible for bringing the Tulane Center for Public Service and Newcomb Art Department together with administrators at Benjamin Franklin.

Fontenot has been teaching her students about the wetlands for months and her classroom wall is one of the surfaces being painted. Earlier in the semester, the Tulane artists went to Jean Lafitte National Historic Park and Preserve and returned with photographs to inspire their work.

Before painting of the mural, the Tulane students created sketches of its design that were then projected onto the walls for guidance. But before it could be given life with wet and vivid brushstrokes, this large-scale paint-by-numbers project received some final suggestions from Fontenot's class.

“More animals. They definitely wanted more animals,” laughs Jessica Lehman, a sophomore who is another of Tulane's muralists. “And so we added an alligator here, a pelican right there,” she says, pointing to each creature on the mural wall, and then searching for more between the bodies of students shuffling through the stairwell.

With her index finger extended, and her arms at half-mast beneath an oversized smock, Lehman blithely peruses the room in a slow, blue twirl, resembling the weeping wetland trees coming into fruition on the walls behind her.

Contributor Jane DiIorio is a senior majoring in English at Tulane.