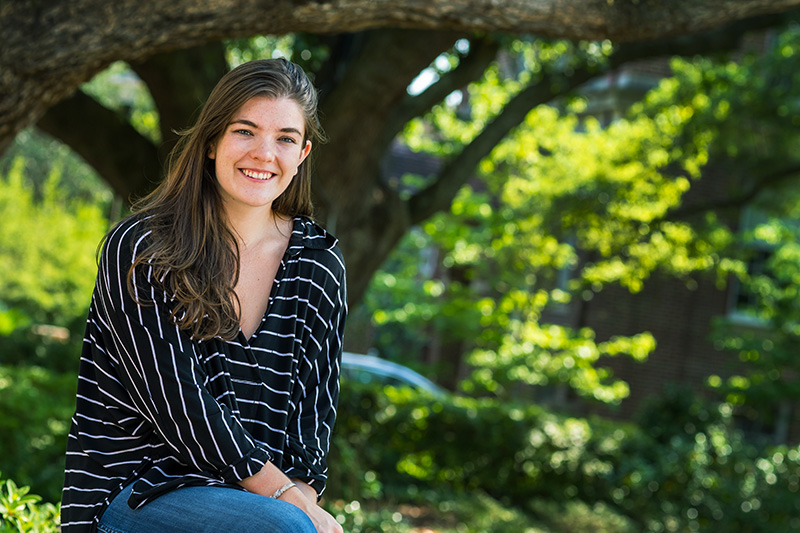 After Samantha Tigner began to consider how islands such as the U.S. Virgin Islands would recover from hurricanes Irma and Maria in 2017, she turned the idea into an independent study. (Photograph by Sally Asher)

When hurricanes Irma and Maria passed over the U.S. Virgin Islands in 2017, Samantha Tigner immediately worried for the safety of a childhood friend who lived there.

The friend and her family were OK, Tigner learned, but the pair of natural disasters wrecked the islands’ tourism-driven economy and disrupted a biodiverse setting. Tigner, an environmental studies and international development double major in the Tulane School of Liberal Arts, saw an opportunity for academic research.

Nine months after those storms, the islands are still in recovery mode, and Tigner has completed an independent study of the islands’ recovery plan with proposed solutions for moving forward.

“This was hands down the most rewarding experience of my undergraduate career.”

“A lot of the specific courses I’ve taken have a really strong social focus, like the social implications of environmental change,” Tigner said, “and tying them into international development, the disproportionate cost to certain countries, particularly poorer countries. I started thinking, ‘What’s going to have to change in the way that they handle and respond to disasters to reduce this severe adverse impact?’ That became the crux of the research.”

She started her research in October, and thanks to a Newcomb College Institute grant, spent the week of spring break in the U.S. Virgin Islands, where she interviewed government officials, engineers and NGO workers, as well as the people who live there, like taxi drivers, waiters and others dependent on tourism.

“This was hands down the most rewarding experience of my undergraduate career,” Tigner said. “It was wonderful.”

Tigner, who also co-founded an environmental club at Lusher Charter School called Generation Green, said she intends eventually to circulate her project to the people she met in the islands, adding that the everyday people she met also had solutions and ideas to share as the islands recover and try to rebuild.

After traveling, Tigner said she will return to the Washington, D.C., area, where she hopes to work in the environmental field.