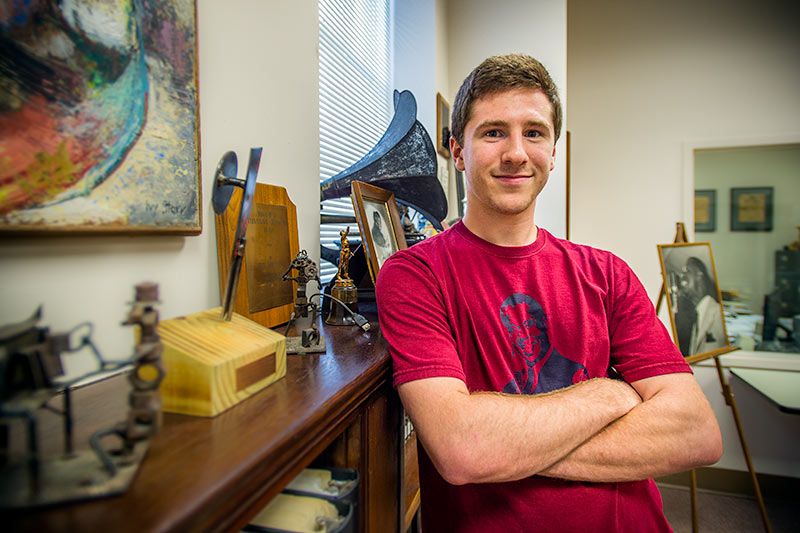 Tulane University senior Jonathan Rizner studies the trumpet and its influence on jazz culture in New Orleans as part of his senior thesis as a member of the Creative Premedical Scholars Program. (Photo by Ryan Rivet)

Pre-med students at Tulane University have the opportunity to broaden their horizons beyond the undergraduate coursework that future doctors have traditionally pursued. Through the Creative Premedical Scholars Program, undergraduates can major in the liberal arts while still focusing on medical school in the long run.

Students accepted into the program are also accepted into the Tulane School of Medicine. During a student’s first two years of study, they meet pre-med requirements. Afterward, the student may pursue a non-science major.

One of Tulane’s Creative Premedical Scholars is Jonathan Rizner, a senior majoring in Spanish and music. Without the program, Rizner said he might not have been able to go abroad or join the local musical community.

“Research is challenging because it forces you to be independent, but also to look for help when you need it.”

“Just doing science all your life, you miss out on stuff,” said Rizner. “When you are a doctor, it’s not just a body, but a person you have to deal with.”

“I didn’t have an exact research question ready, but that’s part of research,” said Rizner. “The more you learn, the more you can narrow down what you want to study.”

Rizner went into his research with a lot of questions. Ultimately, he decided to study the implications of musicians switching from the cornet to the trumpet in the 1920s.

To do so, Rizner utilized the Hogan Jazz Archive for his research, relying extensively on the oral histories available.

The research forced Rizner to leave his comfort zone, trying to figure out the reasons behind the musical phenomenon. Still, he has found the skills he’s learned from the experience rewarding and believes that research is something important for all disciplines.