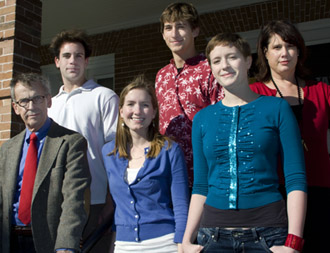 Back from attending a national writing conference are, front row from left, professor Peter Cooley and students Catherine Freshley and Vaune Hough-Snee; and back row from left, students Michael Armbruster and Chris Meinzen with Paula Morris, assistant professor. (Photo by Ryan Rivet)

Creative writing professors Peter Cooley and Paula Morris traveled recently with four students to the annual Association of Writers and Writing Programs conference, held this year in Chicago. I joined Michael Armbruster, Vaune Hough-Snee and Chris Meinzen in attending numerous panels that discussed both the profession and craft of writing.

“We started taking students last year because there are so many writing-related panels, not to mention readings and appearances, that are of interest to creative-writing students,” Morris said. “It's also an opportunity for young writers to learn about magazines and journals to which they can subscribe and submit work, about MFA courses and summer conferences, and about useful organizations and professional associations.”

But as writers themselves, and faculty members in the English department at Tulane, Cooley and Morris weren't there to chaperone.

“AWP is the major annual event for writers who teach. It's a chance to connect with other people in the field, and see what's going on with academic publishers and the plethora of literary journals,” said Morris, who is an assistant professor in the English department.

With panels, readings and discussions offered in nearly every one of the Chicago Hilton's 20 conference rooms and ballrooms for six sessions a day, for three days, conference-goers could choose from 360 different events to attend.

The breadth of subject matter covered in the sessions is reflected in what the students found most interesting and informative about the conference.

For Meinzen, the conference presented a new option for post-graduation plans.

“I actually ended up learning a lot about beginning writing programs,” he said. “I would really like to start a Writers-in-the-Schools program in New Orleans and develop that in partnership with Tulane.”

For Hough-Snee, the conference offered some insight into a career path that isn't clearly defined.

Hough-Snee said, “I learned some very practical information  that is, how to combat scams and protect a creative thesis from getting 'published' on the Internet, what sort of writing makes a grant proposal stand out  that sort of thing. All this was tempered by the more creative-themed panels that I attended.”

In the fall, students applied to attend the trip, which was made possible by the English department's Creative Writing Fund. The fund, created by an anonymous pledge of $1.5 million to the creative writing program over a five-year period, also will bring poet Billy Collins and writer Joan Didion to campus this spring as part of the Poet Laureate and Great Writers series.

“I'm way enthused that Tulane provided us with this opportunity,” Hough-Snee said.

For more information about the Creative Writing Program, contact Gaurav Desai, chair of the English department, at 504-865-5160.

Contributor Catherine Freshley is a Tulane senior majoring in English and economics.