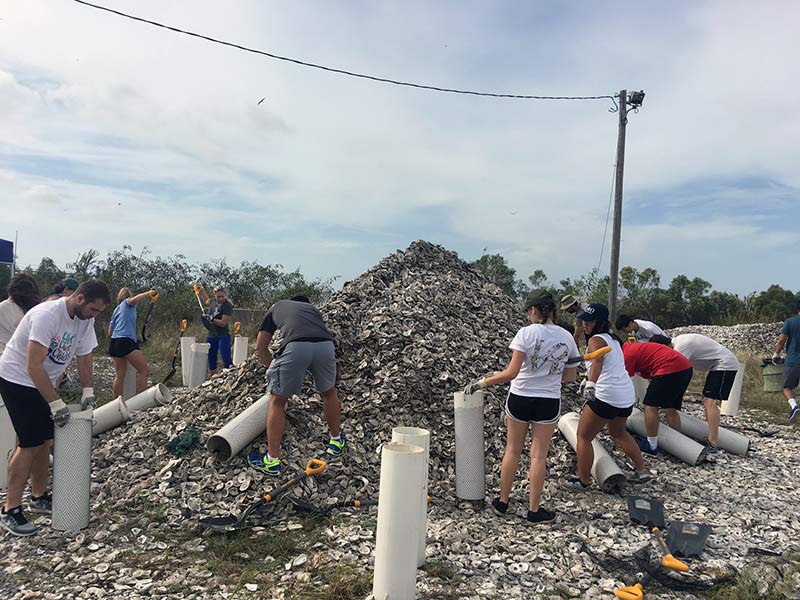 Partnering with the Coalition to Restore Coastal Louisiana, a group of Tulane students traveled to Buras, Louisiana, in late October to sort and bag oyster shells that will be distributed in reefs throughout coastal Louisiana to encourage oyster reef growth in the area. The trip was part of the Oyster Shell Bagging Coastal Restoration Program organized through Tulane Jewish Leaders, the leadership incubator run by Tulane Hillel.

The coalition’s goal is to rebuild coastal Louisiana through outreach programming. Local restaurants donate leftover oyster shells to the nonprofit, and the shells are taken to the Buras site to be placed in areas with at-risk wetlands.

“Oyster reefs filter out water contaminants, provide homes for many aquatic species and serve as a buffer from major storms.”

“I wanted to organize this event because I care about reversing the negative effects humans have had on the planet,” said Coaston.

Coaston planned the volunteer trip through Tulane Jewish Leaders program, a group that he was initially introduced to through a Tulane Interdisciplinary Experience Seminar (TIDES) course. The program is overseen by Liza Sherman, chief programs and operating officer at Tulane Hillel.

Sherman said that the program currently has 272 Jewish and non-Jewish members and has jump-started approximately 112 student programs in the 2016-17 academic year and is on track to do over 140 student-envisioned and developed programs this year.

“Students envision what they would like to see happen either on campus or in New Orleans at large, and the staff provides consulting services to help them think through logistics,” she said. “This was a cool opportunity for students to come together with other New Orleanians and get to know a different side of Louisiana in Plaquemines Parish.”

After arriving at the site, the volunteers, which included Tulane students and three local community members, formed an assembly line to cut nets, comb through piles of oyster shells, fill bags with the shells and then transfer the bags onto carts.

“The 8 tons of shells that we bagged were moved to Barataria Bay and deposited into the ocean,” said Coaston. “Eventually, new oysters will grow on the deposited oysters, and a new oyster reef will be established.”

“Oyster reefs filter out water contaminants, provide homes for many aquatic species and serve as a buffer from major storms,” he added.