Students Break With Tradition This Spring

Traditionally, college spring break has been a time for fun on the beach or a trip home to visit family. Some Tulane students, however, are trading in their beach towels for a chance to help others in need. The Alternative Break program, coordinated by the Tulane Center for Public Service, organizes student-volunteer opportunities during the university's spring break  and there has been no shortage of interested students. 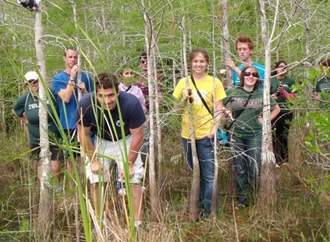 Twelve Tulane students traveled to Florida during spring break last week to tidy up a barrier island at Everglades National Park. Here, they take a moment to pose for a photo during an exploration of the park between volunteer shifts. (Photo by Chris Meinzen)

“Tulane Alternative Break trips are student-initiated and -organized trips designed to encourage our students to examine their own personal role in the larger issues that affect us all through service, activism and leadership, while having fun at the same time,” says Avery Brewton, community service program manager in the Center for Public Service.

March 23â“27, during the university's official spring break, 36 students volunteered with Rebuilding Together in Houston, the Youth's Village in Memphis, Tenn., and Everglades National Park in southern Florida.

“Students can really be transformed by the process of learning experientially in the field,” says Brewton. “Upon return, participants are encouraged to continue doing service in the New Orleans community and raise awareness on and off campus by sharing their experience with others.”

The program is exploring the feasibility of creating opportunities during other university breaks.

Help NOLA, a CPS program formed in 2007, organizes community-service opportunities for students at other universities who wish to spend their spring break rebuilding New Orleans. Bridget Smith, senior program coordinator of CPS's campus and community partnerships, says that Help NOLA was formed in response to the outpouring of interest from volunteers following Hurricane Katrina and lack of agencies to help organize them. 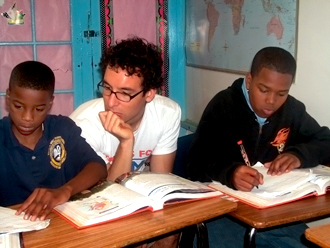 Nick McIntyre, a sophomore at Stanford University, tutors fifth-graders Dameon Dozier (left) and DaiJon Landry as part of the HelpNOLA project at Tulane, which provides volunteer opportunities for students at other universities who wish to spend their spring break helping to rebuild New Orleans. (Photo by Alicia Duplessis)

“For a while there were just so many volunteers wanting to help, but many of the agencies were already full,” says Smith, who adds that in the last two years Help NOLA has assisted 25 groups in finding community service work in New Orleans.

Among those assisted by Help NOLA this year was a group of 13 students from Stanford University. Nick McIntyre, a sophomore majoring in civil engineering at Stanford, made the New Orleans excursion for the second time.

The first time around there were far fewer students, he says. But this time, he led the effort to encourage more students to attend.

I went on the trip last year, and I thought that other Stanford students should experience this,” said McIntyre. “It really gives perspective to what young people can do as far as social movements are concerned.”

While in New Orleans, the Stanford students planted trees in the City Park and tutored at Sophie B. Wright Charter School.