During spring break, Ryan Watkins-Hughes, a master of fine arts candidate in digital media at Tulane, mounted his debut New York solo show. For his project, “From Gallery to Grocery: Yes, We Canned,” Watkins-Hughes transformed a Lower East Side gallery to operate under the pretense of a local corner grocery. 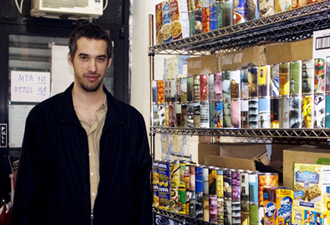 Watkins-Hughes, whose ongoing “Shopdropping” project is the basis for the transition, is exhibiting his “shopdropped” cans along the newly deployed shelves, in an altered environment complete with shoddy carpeting, cardboard floors and miscellaneous grocery products.

“Shopdropping” essentially is the reverse act of shoplifting, Watkins-Hughes explains. It is an ongoing project in which he buys cans of food and replaces the label with his original images.

Retaining the functional bar codes, he drops the cans back onto the grocery shelves. The result is a disruption of the regulated continuum of the commercial activity within the store.

“I explore the large-scale order and dynamic flow of the grocery store by infiltrating its giant operational structure,” Watkins-Hughes says.

The exhibition operates simultaneously as a site-specific installation and a vibrant happening. Watkins-Hughes has created fake “bodega paraphernalia” for the exhibition, paying homage to the signature icons of local New York corner stores such as promotional beer posters, random flags, garish ads and colorful food items without nutritional value. Among these objects are the ubiquitous canned food items that serve as inspiration for Watkins-Hughes. 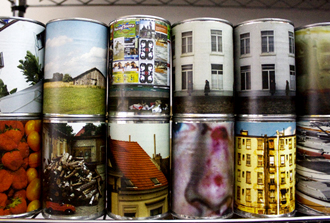 For his solo project, “From Gallery to Grocery: Yes, We Canned,” Watkins-Hughes transforms the Lower East Side gallery to operate under the pretense of a local corner grocery.

Aesthetically reconfiguring such items using his original images, Watkins-Hughes displays these transformed objects in their native environment. The altered cans as well as photographs of past “Shopdropping” interventions are available for sale.

For every work by Ryan Watkins-Hughes that is purchased, Heist Gallery is matching it with a donated can to the Food Bank of New York City. In addition, all food items in the exhibition will be donated once the show closes on May 3.

Placing this activity within the context of the gallery setting, Watkins-Hughes reminds viewers of the increasingly gentrified nature of the Lower East Side that has pushed out “mom and pop” shops to make room for a multiplying number of galleries, luxury boutiques and salons.

However, the space retains its function as a commercial art gallery, pointing to the fact that art is still a commodity available for purchase, like canned food.

Born in Atlanta, Watkins-Hughes attended the Pratt Institute in Brooklyn, N.Y. He has exhibited his work in New York City and throughout the Americas and Europe. He plans to receive his MFA from Tulane in 2010. His adviser is Kevin Jones, assistant professor of digital media.