Students Connect With LEGO and Climate

Just as Tulane students have done since 2004, four Tulane students are helping elementary-age school children prepare for a FIRST LEGO League competition. But this year the intense coaching has a twist: They are coaching in French as well as English. 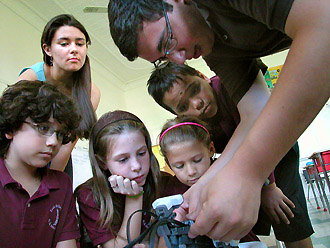 Tulane students Laura Matthews and Joseph Rohr coach students at Ecole Bilingue elementary school as they work on their entry for the FIRST LEGO League competition. (Photo by Alicia Duplessis)

FIRST LEGO League is a global program created to get kids excited about science and technology. An organization called FIRST (For Inspiration and Recognition of Science and Technology) and the LEGO Group, a manufacturer of construction toys, each year sponsor tournaments to gear up young students' interest in science and engineering challenges.

The competition presents theme-based challenges to involve kids ages 9â“14 in research, problem solving, engineering and teamwork. Each challenge has two parts  the project and a robot game. In the robot game, robots complete predesigned missions in 2 minutes and 30 seconds.

The Ecole Bilingue students are studying wildlife in the wetlands, including the whooping crane, green sea turtle and manatee. They also are comparing Louisiana ecosystems to similar ones in Quebec and southwestern France. In their LEGO project, “Climate Connections,” they are addressing the problem of wildlife habitat destruction caused by the effects of global warming.

Three of the four Tulane students  Brittany Edwards, Lindsey Wood and Laura Matthews  are first-year School of Science and Engineering students hoping to fulfill part of the public-service graduation requirement as they encourage the young students to engage in the fun of science.

Edwards is a chemical engineering major with particular interest in water treatment and purification. Wood, who has studied French for seven years, is majoring in biomedical engineering.

Matthews is pursuing a double major in ecology and evolutionary biology and anthropology and has studied French for four years. She is a veteran of FIRST LEGO League competitions, having participated in middle school in Oregon. She's guiding the Ecole Bilingue students through the robot-building process.

“My job as a mentor is to help,” says Matthews, “but to help by keeping my hands off the robot because the goal is to have all the work be the kids.' ”

“I enjoy working with the kids so much,” says Rohr. He plans to pursue a career in a medical field that will involve his French-speaking skills.

This year's Louisiana FIRST LEGO League tournament will be held on Dec. 6.

The Tulane students' participation in the FIRST LEGO League is supported by the School of Science and Engineering. Annette Oertling, a professor of practice, is assistant dean for the school's K-12th grade outreach program. She also teaches the “Communicating Science” course at Tulane.

“I'm proud of our students,” says Oertling. “I'm amazed, excited and very proud of them.”