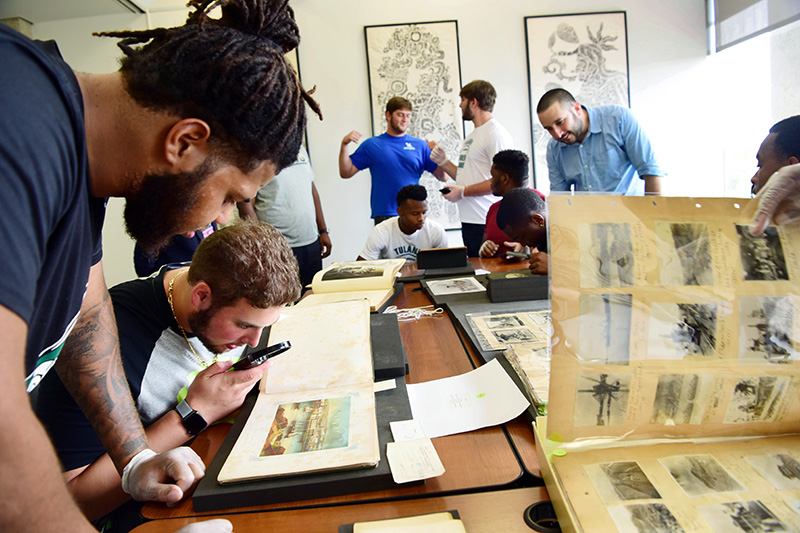 Felipe Cruz, an assistant professor of history in the School of Liberal Arts, leads the summer course, which provides access to cutting-edge tools at the Tulane Maker Space and artifacts housed at the Latin American Library.

“People will be able to interact and play with the exhibit.”

— Felipe Cruz, assistant professor of history in the School of Liberal Arts

In June, the students investigated the Latin American Library’s special collections with the goal of creating an interactive museum exhibit as their final project.

“The library’s director, Hortensia Calvo, and archivist, Christine Hernández, worked closely with us to provide access to rare artifacts, like early Mesoamerican manuscripts,” said Cruz. “We spent the last week working with 3D printers and laser cutters in the Maker Space to build the exhibit.”

Divided into three groups, the class produced different facets of the public exhibit, which will be displayed at the library.

One group used augmented reality technology to make an interactive replica of an early map of Tenochtitlan — the capital city of the Aztec Empire. Using a tablet, guests can uncover virtual markers on the map indicating important locations throughout the city. Tapping on the markers shows articles, photos and archaeological sketches of each location.

“The library also has a great collection of archaeological rubbings,” said Cruz.

A third student group scanned rubbings of Mayan carvings depicting ancient animals, processed the images and then built a re-creation of the original carvings. The exhibit will have sketch paper for guests to make their own archaeological rubbings to take home.

“People will be able to interact and play with the exhibit, ” said Cruz.