Members of the Tulane community showed their appreciation to the people of Qatar on Tuesday (April 29), stretching out their hands to thank the country's visiting Amir for millions of dollars in Tulane scholarships and healthcare assistance after Hurricane Katrina. 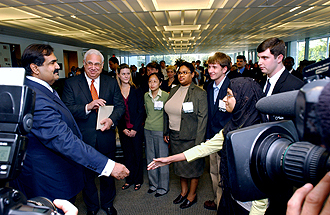 His Highness Sheikh Hamad bin Khalifa Al-Thani, Amir of the State of Qatar, received the thank yous with regal smiles as individuals shook his hand and as Tulane bestowed honors during a special ceremony and reception in the Lavin-Bernick Center on the Tulane University uptown campus.

His Highness the Amir, as he is formally addressed, was on a visit to the Gulf Coast region April 29â“30 to review the progress of the Qatar Katrina Fund that was established with a $100 million gift from the people of Qatar to assist the victims of Hurricane Katrina.

From the total pledge of $100 million, more than $82 million has been distributed thus far.

As the Amir and his delegation entered the LBC ballroom, led by Tulane President Scott Cowen, the 200 assembled guests stood and applauded. Then a hush swept over the room as Cowen introduced the Amir to members of the Board of Tulane, faculty and staff of the community clinic supported by $5 million from the Qatar Katrina Fund, and representatives of the 108 Tulane students who have received Qatar scholarships from $10 million given to Tulane.

“This is a terrific honor,” said Matthew Goitia, a senior majoring in finance and accounting from New Orleans who is graduating from Tulane this spring. “I thank him for his generosity. He stepped up when others didn't, at a time of need. It really shows the man cares. I will be indebted for as long as I live.” 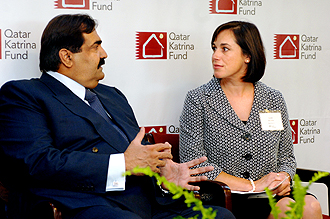 At the reception, the Amir was welcomed with a musical tribute as Irvin Mayfield, artistic director of the New Orleans Jazz Orchestra at Tulane, played a solo rendition of “When the Saints Go Marching In” on trumpet. Mayfield is cultural ambassador to the City New Orleans and the State of Louisiana.

Cowen presented the Amir with a proclamation from the Board of Tulane and the President's Medal, the highest honor the university president bestows. Cowen also officially dedicated the LBC ballroom as the Qatar Ballroom.

“It is very hard to find the words to express the appreciation on behalf of all the people of Louisiana to His Highness the Amir and the people of Qatar,” Cowen said.

“I stand in awe of all that Qatar has achieved and I marvel at the sensitivity and the efficiency with which they identified needs and awarded grants along the Gulf Coast after Hurricane Katrina. It was not the differences but similarities the Amir and the people of Qatar saw on that day in August of 2005 â¦ over 8,000 miles away, His Highness mobilized his government to respond to our crisis.”

In response to the recognition, the Amir spoke in Arabic as a translator read the prepared remarks in English.

“Our goal was to deliver help as directly as possible to the victims,” said His Highness the Amir. “We were particularly interested in projects that help displaced individuals and families return to their communities  for example, through housing assistance, funding for medical care and student scholarships.” The Amir concluded his remarks in English, personally encouraging students to spend a year in Qatar.

Dr. Karen DeSalvo, executive director of the Tulane University Community Health Center and vice dean of community affairs at Tulane, thanked the Amir on behalf of the thousands of patients “who literally have no other realistic access to health care.” In the downtown community clinic and a mobile medical unit funded by the Qatari gift, more than 1,000 patients receive services each month, DeSalvo said.

“The Qatar Katrina Fund has helped us heal this region and this city, and for that we are enormously grateful.”