As a steady stream of tourists wandered through Lafayette No. 1 cemetery located across the street from Commander's Palace restaurant, troops of Tulane students fanned out to groom the historic grounds. Working in partnership with the community group Save Our Cemeteries, some students picked up debris felled from Hurricane Gustav, while others trimmed bushes.

One group scaled the vaults that form the outer wall of the cemetery to clear the top of weeds that had blocked the drainage system. They were among nearly 800 students who on Saturday (Sept. 20) participated in the 18th annual Outreach Tulane, the university's largest annual community service event. 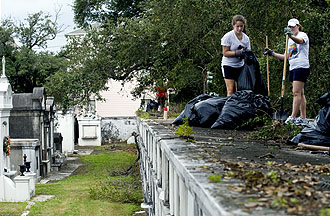 “Thank you, thank you, for all you're doing,” one tour guide said as she ushered a tour group past the toiling students.

Across town, about 80 students worked with Hands On New Orleans, a community group that is organizing the Pelican Greenhouse in City Park.

Tony Zebrowski, civic engagement coordinator of the group, said the students were contributing to the preservation of Louisiana's wetlands by helping propagate native plants that would be planted in New Orleans East and along Bayou St. John.

“How many can say they've helped build a greenhouse in a desolate area of City Park?” asked Salem Elkhayat, a junior from Potsdam, N.Y., who served as student leader of the project. “These students are motivated  enough to wake up at 8 a.m. on a Saturday. We're making a difference in some small way.” 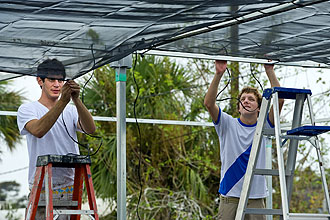 Tulane students  as well as some alumni, faculty and staff members  volunteered at more than 20 sites throughout greater New Orleans.

In addition to the work at Lafayette No. 1 and City Park, this year's activities included painting public schools, surveying restaurant workers to improve working conditions, running a community carnival, installing energy-efficient light bulbs in the Lower 9th Ward, signing up Hispanic citizens to vote, picking up trash and debris at schools and parks, and sorting and repackaging Mardi Gras beads, food and other donations at community centers.

“By working together to provide needed assistance, we strengthen the Tulane community while instilling a deeper connection to our community and fostering lifelong commitments to service,” said Vincent Ilustre, executive director of the Tulane Center for Public Service.

Save Our Cemeteries and Hands On New Orleans are among a number of agencies and organizations who partnered with the Tulane Center for Public Service, CACTUS and the Office of Student Programs. Other community service organizations that regularly partner with Tulane include Arc of Greater New Orleans, St. John's Lutheran School, the Recovery School District of Louisiana, New Orleans Outreach, Communities In Schools and the Green Project.

Outreach Tulane serves as the kickoff event for ongoing service initiatives throughout the year, including the Martin Luther King Day of Service, which is scheduled for Jan. 17, 2009.