Students in the Tulane-Xavier Minority Health International Research Training program are heading overseas this month where they will spend the next 12 weeks studying the practice of international medicine. 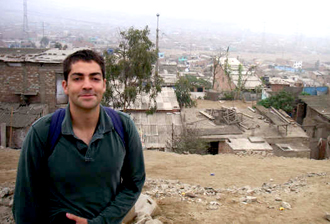 Benjamin Gonzalez, who received his master's degree from the Tulane University School of Public Health and Tropical Medicine in December, is learning about the practice of international medicine in Peru. (Photos courtesy of Benjamin Gonzalez)

The training program is currently in its third summer. It affords minority students from Tulane and Xavier universities the opportunity to gain experience in conducting research into health problems such as heart disease, tuberculosis, parasitic infections and diarrheal disease in other countries.

An associate professor of tropical medicine and pediatrics, he serves as acting chair of the Department of Tropical Medicine at Tulane.

Benjamin Gonzalez was the first of nine students to leave for his program destination and will soon conclude his 12-week training in Lima, Peru, where he is studying lung function in a pilot project called "Feasibility of conducting spirometry in San Juan de Miraflores, Peru." Gonzalez, of El Paso, Texas, earned a master's degree in public health from Tulane in December.

"The program has exceeded my expectations," says Gonzalez who is preparing for medical school this fall. "Once I arrived in Lima I started my rotations in the labs and was even able to rotate in the San Juan de Miraflores district in the community of Pampas."

Gonzalez requested Peru as his permanent worksite during the program because of his familiarity with the country through a previous visit. He also speaks Spanish and has a "passion for working with communities in Latin America."

"Everyday I take the one-hour bus ride to Pampas and walk its very poor neighborhoods looking for patients for the spirometry exam," says Gonzalez. "I am learning to conduct research in areas like these. It takes skills you don't learn in the classroom and a great deal of perseverance." 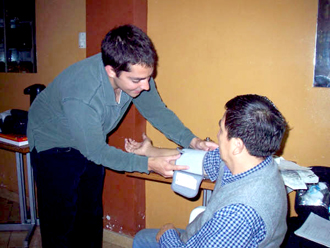 Faculty members who oversee the research projects also serve as program advisers for each participant.

"The program is open to undergraduate and graduate students, but we usually have a 60/40 ratio of graduates to undergraduates," says Andrea Meyer, senior program coordinator for the Center for Evidence-Based Global Health at Tulane.

"We have seen a huge increase in the number of applicants each year as the word is getting out."

Meyer says that the program has consistently had more graduate students from Tulane and undergraduates from Xavier to participate, but there is a foreseeable change in the number of Tulane undergraduate applicants in the near future.

"We're getting a lot more undergraduate applicants from Tulane since the Tulane School of Public Health and Tropical Medicine recently added a bachelor's program in public health," says Meyer.