Professor of sociology Martha Huggins takes her students from the classroom to the courthouse to help Orleans Parish public defenders secure due process for the poor. In the “Ethnographies of Crime” course, taught by Huggins for the first time this fall, students are introduced to the images and realities of crime. 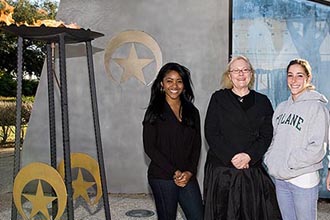 Using the tools of ethnographic studies and documented crime statistics, the course explores “where visual and media images contradict the daily realities of justice for the poor of color in Orleans Parish.”

“I'm a criminologist and my interest is in crime, criminals and the courts,” says Huggins. “I created this course because the New Orleans criminal justice system, inequitable and disorganized before Hurricane Katrina, was totally leveled by the flood. One of the last areas being addressed in city development, and not being done satisfactorily, is the court system, particularly for the poor.”

The course fulfills part of the public-service graduation requirement. As part of course assignments, students work with the Magistrate Court's First Appearance Project at the Orleans Parish House of Detention. First Appearance aims to provide vertical representation for indigent defendants, which means that the same attorney represents a detainee throughout the entire legal process.

Huggins says she implemented a blogging component to the course in which students are able to read each other's accounts of their experiences. “Knowing that the House of Detention would generate a range of new feelings, I wanted to encourage them to express their feelings and fears through writing,” she says.

Marissa Allweiss and Dermesha Sterling, both of New Orleans, enrolled in the course to learn how the legal system in their hometown has recovered since Katrina. Allweiss, a psychology major, and Sterling, a communication major, agree that the system has some improvements to make.

“We conduct intake interviews for new detainees to find out if they are eligible for state representation,” says Sterling. “From a list of questions, we ask things about their income and their family. We try to get as much information as we can from them during the interviews because it will help the attorneys help them.”

Allweiss says that her time volunteering has been an “eye-opening” experience.

“It's really hard to do sometimes,” says Allweiss. “The people there have to have their bonds set, but when we talk to them we realize they probably don't even have the money to pay it.”

Huggins is the Charles A. and Leo M. Favrot Professor of Human Relations in Tulane's Department of Sociology and plans to offer the course again in spring 2010 under a new name taken from the location of the New Orleans House of Detention: “Tulane Students at Tulane and Broad: Ethnographies of Justice.”