By 8 a.m. on Saturday (Aug. 29), a sea of blue- and green-clad students poured into the Lavin-Bernick Center on the uptown campus, anticipating their day of service for the 19th Annual Outreach Tulane. On the fourth anniversary of Hurricane Katrina, the event drew approximately 1,000 Tulane students who volunteered at locations throughout the New Orleans area. 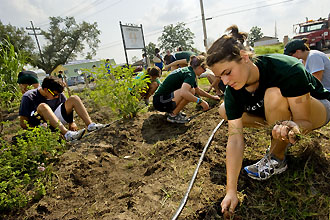 Students weed the vegetable garden of residents who have returned to the lower Ninth Ward neighborhood of New Orleans. (Photo by Paula Burch-Celentano)

The wave of enthusiasm was contagious as students gathered to take part in one of the community service site projects hosted by the Louisiana Disaster Recovery Foundation's Louisiana, My Heart, My Home Rebuild-a-thon event. I joined a group of Tulane students who were placed with the Make It Right Foundation, which builds affordable, energy-efficient homes for residents of the lower Ninth Ward.

The spirit of giving back permeated the group as we learned that our service project was weeding a micro-farm next to one of the homes built by the foundation on Tennessee Street. The neighborhood's residents cultivate the small farm to provide fresh tomatoes and sugarcane for local families.

As we got our hands dirty, another group of Tulane students prepared to march in the heat. Students and community participants gathered at North Galvez Street for a second-line parade commemorating those who lost their lives in the wake of Hurricane Katrina and promote community healing.

Holding banners and wearing snips of black ribbon, the students marched to pounding drums and pulsing shouts of slogans. Neighbors taking it in from the shade of their rebuilt homes smiled as the parade passed.

The Tulane Center for Public Service, the Community Action Council of Tulane University Students (CACTUS), SAFER and the Office of Multicultural Affairs coordinated projects with 23 community groups for Outreach Tulane.

August 29 became a day the Tulane community pulled together to renew a commitment to being members of the New Orleans community, a bond not even a hurricane could break.

Mary Cross is a senior majoring in communication at Tulane University. She volunteered for the Make It Right Foundation project for Outreach Tulane.