A select group of students from the A. B. Freeman School of Business at Tulane University will fly to Omaha, Neb., this week for a once-in-a-lifetime opportunity to spend an afternoon with billionaire investor Warren Buffett. 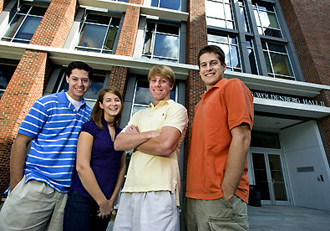 Getting ready for their trip to Omaha, Neb., to visit with billionaire Warren Buffett are A. B. Freeman School of Business students, from left, Stephen Frapart, Kathleen Murphy, Chris Weems and Scott Thompson. (Photo by Paula Burch-Celentano)

Peter Ricchiuti, assistant dean, and 27 Tulane students will get the chance to ask the famed “Oracle of Omaha” about the current turmoil on Wall Street, the future of the economy and other issues during a planned two-hour question-and-answer session on Friday (Oct. 17) at Buffett's headquarters at Berkshire Hathaway Inc. He is chair and chief executive officer of the conglomerate holding company.

The day's agenda includes lunch with Buffett and separate tours of two Berkshire Hathaway subsidiaries: Nebraska Furniture Mart and Borsheims, one of the largest independent jewelry stores in the nation.

Tulane will be one of six schools represented at the session. The opportunity came about earlier this year, when business senior Stephen Frapart contacted Berkshire Hathaway to invite the investor to speak on the Tulane campus. Although Buffet declined the invitation, company officials recommended that Frapart apply to an annual program bringing business students to meet with Buffett. Frapart's petition was successful and trip planning got under way.

The trip comes at a time of tremendous uncertainty in the U.S. stock market when world leaders are grappling with a global banking and credit crisis. The economy is one of the biggest issues in the upcoming presidential election; both candidates mentioned in a recent debate that they would consider asking Buffett to serve as treasury secretary in their administrations.

“I think the timing of this trip couldn't be better,” says Ricchiuti. “The one person in the world everyone wants to talk to right now is Warren Buffett. It will be interesting to hear his perspective.”

Buffett purchased a $5 billion stake in Goldman Sachs Group Inc. just as Congress mulled a federal bailout plan. On Oct. 1, he invested $3 billion in General Electric. “We're talking to someone who just put $8 billion into the market,” Ricchiuti says. “He is a long-term investor, and I think that is the kind of person you need to hear from in times like this.”

Ricchiuti is director of research for Tulane's Burkenroad Reports, a securities research program in which MBA students publish and distribute investment research reports on 40 small-cap companies in six Southern states.

A. B. Freeman School of Business administrators have been planning the Buffett trip for several weeks. Nineteen undergraduate seniors and eight second-year graduate students will attend. Because the trek is limited to 27 students, organizers chose participants randomly from applications from the top 25 percent of each class in the business school.