Fifth- and sixth-graders at Samuel J. Green Charter School in New Orleans are starting a school newspaper with the help of Tulane University students enrolled in “The Teaching of Writing,” a course that introduces college students to the theories and practices of writing instruction. T. R. Johnson, an associate professor in the Department of English, says it's an idea that he'd like to share with other colleges around the country. 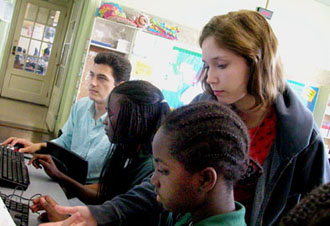 “The course is designed to help English majors think about what might be involved with becoming a teacher and what's specifically involved in the teaching of writing in a contemporary urban setting like post-Katrina New Orleans,” says Johnson. “We'll create a set of documentary films that will become a training DVD so that other schools can do this in other cities,” says Johnson.

Throughout the spring semester, Johnson's students have studied the structure and style of news articles and, in turn, have taught what they've learned to the students at Green. Part of the Tulane students' final grade will be based on a video documentary that showcases what they have learned while working with the elementary school students.

At the end of the semester, Johnson says he'll fuse together parts of the student projects to create one full-length documentary. The film will cover the tools students began with as well as what they learned along the way. It also will provide a brief introduction to the university's service learning program.

“Right now is a very exciting moment for education in New Orleans,” says Johnson. “It is widely recognized that the school system pre-Katrina was broken, and there is a tremendous amount of fresh energy pouring into the school system to intervene and make it into something great.”

In a similar class offered last semester, Johnson's students prepped Green students for the Louisiana Educational Assessment Program (LEAP) exam. This semester, fifth- and sixth-grade Green students are nearing completion of the school's first campus newspaper, while seventh- and eighth-grade students have formed a poetry club and are working to create a compilation of their work with the assistance of Tulane students.

The academic service-learning program is a collaborative partnership between Tulane University and the community. It is led by the Tulane Center for Public Service.