The Howard-Tilton Memorial Library is open past 1 a.m. most nights and the Lavin-Bernick Center is accessible 24 hours a day for late-night studiers and snack-eaters. But this semester, there are new options on the uptown campus for late-night fun. 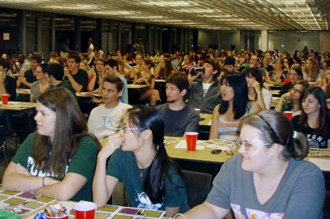 A large crowd of students shows up for a fun night of grocery bingo, sponsored by the new Tulane After Dark program. (Photo by Rebecca Bello)

This year, Tulane After Dark, a new programming effort driven by the Provost's Office and organized by the Division of Student Affairs, the Student Health Center, Newcomb-Tulane College and the Athletics Department, has been responsible for changing late-evening entertainment choices for students.

“I think as an institution we have an obligation to provide programming for students that occurs at night and on the weekends,” says Molly Ward, associate director of facilities at the Lavin-Bernick Center.

Ward says these programs were designed to establish a new culture of later programming on campus that is exciting, allows students to interact with their peers and is a safe alternative to leaving campus.

Already this month, Tulane After Dark has put on two bingo nights, a poker tournament, a late-night concert on the LBC's Gorson Porch, a movie night and a 10 p.m. pep rally. Upcoming programs include two open-mic nights at PJ's, a speed-dating night and another concert, among other activities.

So far, it seems that students are enthused about having more on-campus activities.

“It's nice to see campus active and busy late at night and students being engaged in activities on campus rather than off,” Ward says. “We have had a really positive response. We have had hundreds of people at most of our programs and had over 400 people at our most recent bingo night.”

In the future, Ward says she hopes that Tulane After Dark will be able to work with student organizations to help plan and fund their late-night events.

The full schedule of events is on the Student Affairs website, or visit the Tulane After Dark fan page on Facebook.