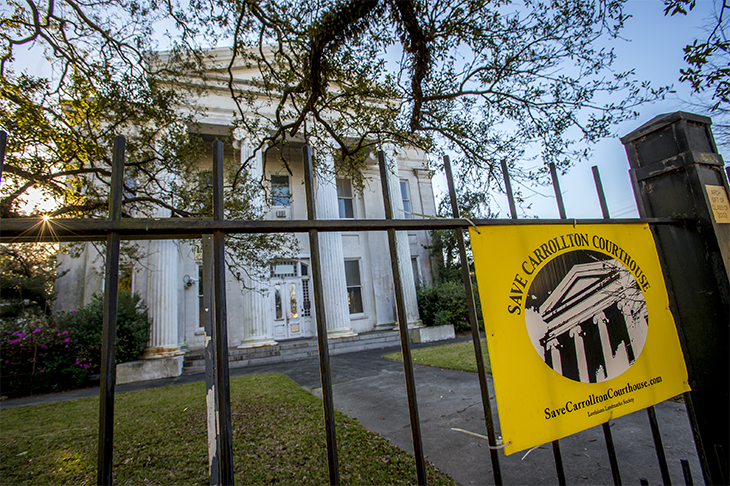 Master of preservation studies students propose plans for the Carrollton Courthouse, which the National Trust for Historic Preservation called “one of the city’s most significant landmarks in New Orleans located outside of the French Quarter.” The building was built in 1855. (Photo by Paula Burch-Celentano)

A university-affiliated arts school with a library and café. A mixed-use community space with an outdoor market and children’s play area. An event venue with a patio, gardens and on-site restaurant.

The proposed uses for the old — and endangered — Carrollton Courthouse, 719 S. Carrollton Ave. in New Orleans, come courtesy of students in the Tulane School of Architecture’s master of preservation studies program.

They, along with students in the LSU Reich School of Landscape Architecture, have been working in collaboration with the Louisiana Landmarks Society since October, not long after the National Trust for Historic Preservation named the Carrollton Courthouse one of “America’s 11 Most Endangered Historic Places.”

“This is an urgent situation from the standpoint of saving this building.”

Students presented their ideas at a public forum, the culmination of a study that involved examining the structure’s history, design and current condition, as well as the grounds and green space.

“Carrollton Courthouse is a beloved landmark that deserves to have a special place in New Orleans’ future,” says Leah Solomon, a student in the master of preservation studies program.

Under the tutelage of John Stubbs, director of the program, and adjunct architecture professor Michael Shoriak, the Tulane group spent many hours studying the 1855 Greek Revival building, from its columns and ceilings to its archways and staircases.

Tulane student Kelly Calhoun says there has been talk about the building being used as a museum, with the grounds transformed into a public park space. She says that would certainly be in line with what students proposed.

“It’s exciting to see that the major parties have either considered the same options for the courthouse or were inspired by our proposals,” Calhoun says.

The building was most recently used as a school but has been vacant since 2013. The Orleans Parish School Board, which owns the building, plans to put it up for auction soon, probably with restrictions that would protect it from being demolished.

Stubbs says time is of the essence.

“There’s no question that it’s deteriorating. This is an urgent situation from the standpoint of saving this building.”