On Thursday (Sept. 17), members of the Tulane Emergency Medical Service celebrated two milestones  a new ambulance and a new office. 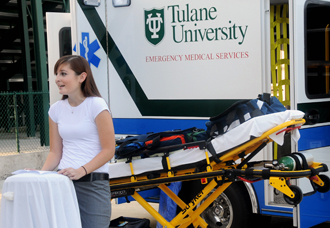 Elena Berry, a Tulane senior and student director of TEMS, speaks at an event celebrating the organzation's new office and the arrival of a new ambulance to serve the university community. (Photo by Sally Asher)

Marjorie Cowen, wife of Tulane President Scott Cowen, "christened" the ambulance in a manner similar to a traditional ship launching. President Cowen led the ribbon-cutting to celebrate the opening of the new facility for TEMS (as the group is commonly called).

"I'd like to salute the 46 active members of TEMS who devote their time without pay to servicing our community," President Cowen said."Because of their dedication and professionalism, calls for emergency help are answered in an average of three-and-a-half minutes."

The TEMS organization, consisting of Tulane undergraduate and graduate students, received funding through the Undergraduate Student Government to purchase the new ambulance.

Unit 60 is only the sixth ambulance in a series for the student-led volunteer organization, bringing to three the number of TEMS ambulances on the road now, according to Elena Berry, student director of TEMS. Berry is a senior from Austin, Texas, majoring in neuroscience and sociology. Like many of the TEMS members, she plans to attend medical school after graduation.

Before Hurricane Katrina, TEMS was housed in the old Monk Simons building, which was torn down after the storm, and moved into quarters in the temporary classroom complex in 2006. At the beginning of the current semester, in conjunction with the university architect and campus planning offices, TEMS moved into permanent housing at a property purchased by Tulane on the corner of Ben Weiner Drive and Claiborne Avenue. This building is the long-term home and the first "base" for Tulane EMS.

The New Orleans City Council presented TEMS with a proclamation honoring 28 years of service to Tulane University and the New Orleans community at large.

Each member of the student organization is required to volunteer at least one 12-hour shift each month on a New Orleans EMS ambulance working municipal 911 calls.