In a world consumed by not-so-real reality television, the Sundance Channel presents “Architecture School,” an original documentary series that follows a group of Tulane University School of Architecture students as they compete for the chance to design an affordable home in postâ“Hurricane Katrina New Orleans. 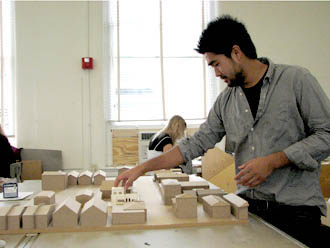 The series premieres Wednesday (Aug. 20) on Sundance and airs weekly at 8 p.m. (central time). A special on-campus showing is scheduled for Sept. 6 at 7 p.m. in Freeman Auditorium at the Woldenberg Art Center.

With thousands of houses inundated by floodwater after Hurricane Katrina and residents left with no place to turn, in 2005 Tulane formed URBANbuild.

The unique urban design and construction program caught the attention of Sundance producers looking for a story of survival and recuperation from the storm's devastating blow.

“URBANbuild is a remarkable collaboration of students and faculty working to make a difference,” says Kenneth Schwartz, dean of the School of Architecture.

“The students are using their foundation of knowledge and skill that they developed at the School of Architecture and are applying that to a very real and meaningful challenge.”

URBANbuild engages students in the process of rehabilitating the city's neighborhoods. Students collaborate with community nonprofit organizations such as Neighborhood Housing Services of New Orleans in the design and construction of affordable houses while using innovative and sustainable design strategies. 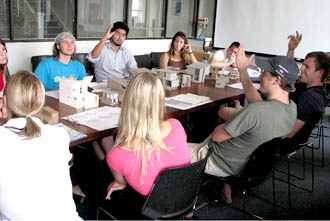 In a scene from the "Architecture School" documentary, Tulane University students vote on the final design for their home construction project.

Schwartz says that students and faculty in the School of Architecture are eagerly anticipating the premiere of the Sundance series.

“There is a great deal of excitement in the school as well as in the city and beyond,” says Schwartz.

“It shows the community that our faculty members are interested in the way students from the school reach out constructively to engage the community.”

A press release from the Sundance channel describes the students as a diverse group, including “Amarit, a funny, charismatic Chicago native; Chris, an affable Georgian who seems somewhat less than driven; Carter, a highly focused Kentuckian; and Adriana, whose aesthetic owes much to her upbringing in Trinidad.”

The show also features Byron Mouton, professor of practice at the School of Architecture and director of URBANbuild.