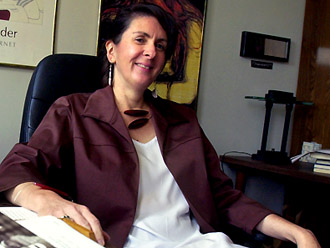 Nancy Maveety, professor of political science, is the author of Justice Sandra Day O'Conner: Strategist on the Supreme Court. (Photo by Paula Burch-Celentano)

Maveety is teaching a special topics course this fall titled "Interest Groups and the Supreme Court." Throughout it, she will examine the Sotomayor nomination, exploring the role of interest groups in the nomination and confirmation process of President Barack Obama's appointee. The Judiciary Committee is expected to vote on her nomination on July 28.

"On the right you may have the National Rifle Association that weighs in with concern on her views on the Second Amendment," says Maveety. "People for the American Way or the American Civil Liberties Union might be examples of groups on the left that would take a position of endorsement and support."

Maveety also will compare Sotomayor's hearing to those of Chief Justice John Roberts and Justice Samuel Alito, which took place in 2005 and 2006, respectively. Interest groups, says Maveety, were significantly more vocal in the two Bush-era hearings than they were during Sotomayor's nomination process.

Though there was little drama during the hearing, many observers were hoping the scrutiny of Obama's nominee might shed light on the president's own judicial philosophy, says Maveety. "Instead, there were several moments where she (Sotomayor) rather explicitly repudiated elements of what we believe to be Obama's judicial philosophy."

For instance, during her testimony, Sotomayor seemed to disavow the utility of empathy on the bench  a departure from the president's stated belief that judicial decisions should be based partially on "what is in a judge's heart."

Sotomayor clarified her stance that case decisions should not be based on what is in a person's heart, but instead by the interpretation of the law.

Maveety's fall course is listed under political science as POLS 401.