How effective is a low-carbohydrate diet in countering weight gain and heart disease? Dr. Lydia Bazzano is asking that question as part of a study funded by a large federal grant aimed at helping young researchers gain experience and compete for independent funding. Bazzano is one of six Tulane researchers under the leadership of principal investigator Luis Gabriel Navar who have received funding from a Center of Biomedical Research Excellence grant to design and perform their own studies. 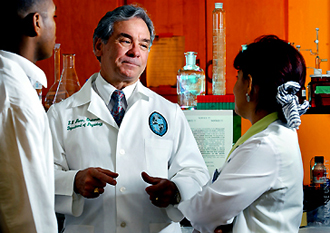 Luis Gabriel Navar is principal investigator of the CoBRE grant that supports six young researchers as they gain research experience that will help them compete for independent funding. (Photo by Paula Burch-Celentano)

Bazzano, an assistant professor of epidemiology and medicine, is recruiting 130 overweight adults to participate in the Study of Macronutrients and Heart Disease Risk (MACRO for short), a year-long study comparing the effect of a low-fat and a low-carbohydrate diet on weight loss and measures of heart health.

She is being guided by her mentor, Dr. Jiang He, who holds the Joseph S. Copes, MD, Chair in Epidemiology.

The low-fat, low-carb study under way by Bazzano is of interest to both physicians and weight-conscious Americans. According to Bazzano, the American Heart Association recommends a low-fat diet to reduce heart disease risk, but low-carbohydrate diets have not been well-evaluated for their heart-health impact. 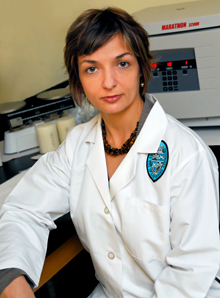 Dr. Lydia Bazzano is one of six young Tulane researchers to receive funding to design and perform their own studies. Her study will compare the effect of low-fat and low-carb diets on weight loss and heart health.

“This study will help us understand the effects of a low-carbohydrate diet on heart disease risk factors such as cholesterol levels, blood pressure, obesity, inflammation, belly fat and others,” says Bazzano.

The Tulane Center for Biomedical Research Excellence, which funds Bazzano's study, was first established by the National Institutes of Health in 2002 with a $10.8 million grant awarded to Navar.

He explains that each of the six researchers “has a research project broadly related to the theme of hypertension and renal research. This funding gets them started and accelerates their career to independent faculty research status.”

All six researchers are performing studies of their own design that will help them gain experience and compete for independent funding.

Navar is the co-director of the Tulane Hypertension and Renal Center of Excellence, which has received a grant of more than $11 million from the National Center for Research Resources of NIH to continue funding through 2012 for Tulane's junior faculty investigators who are studying high blood pressure and its effect on the kidneys as well as the role of kidneys in the development of high blood pressure.

Research supported by the Center of Biomedical Research Excellence grant provides young researchers with the experience and data necessary to be competitive for federal funding, says Navar, who also chairs the Department of Physiology at the School of Medicine.

The researchers benefit from the mentoring at Tulane as well as the extended network of experts throughout the nation who advise the junior faculty in their research endeavors. The junior faculty researchers, including Bazzano, have three years to secure outside funding to grow and continue their own research program for the future.

Additionally, Navar says this study will help launch Bazzano's research career with a focus on dietary approaches to reducing the risk of heart disease and high blood pressure.

Anyone interested in participating in Bazzano's weight-loss study can call 504-988-4390 for more information.