Mosquito meals: Blood in, ammonia out 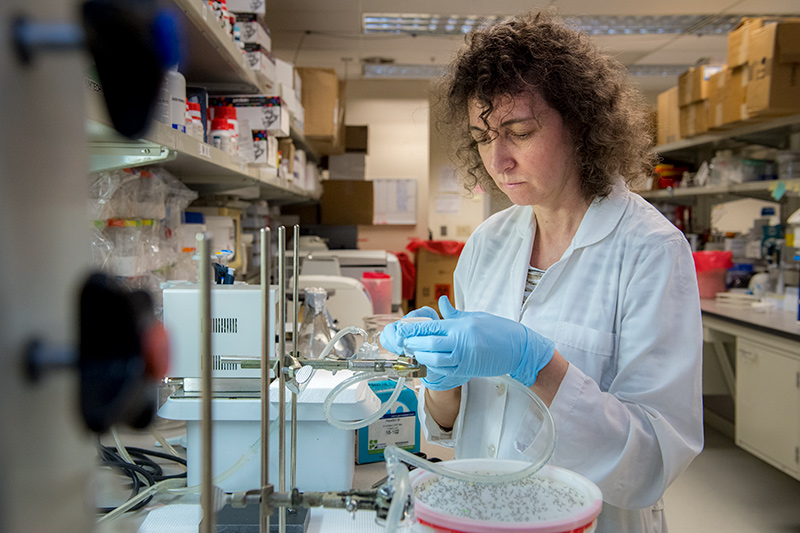 Patricia Scaraffia, an assistant professor in the School of Public Health and Tropical Medicine at Tulane University, led the research on a study that examined how mosquitoes metabolize the blood they ingest. The results could help inform future mosquito control efforts. (Photo by Paula Burch-Celentano)

New research from the Tulane University School of Public Health and Tropical Medicine reveals that mosquitoes use glucose to eliminate lethal concentrations of ammonia released during the digestion of a blood meal. The study was published in the January 2018 edition of The FASEB Journal of the Federation of American Societies for Experimental Biology.

“The experimental procedures developed in this study can be used to conduct detailed metabolic studies in other arthropods that are vectors of human diseases and in other biological systems,” Scaraffia said.

“The experimental procedures developed in this study can be used to conduct detailed metabolic studies in other arthropods that are vectors of human diseases.”

Both adult female and male mosquitoes feed on sugars from plants. Female mosquitoes, however, require a blood meal in order to produce eggs and reproduce. It is during blood ingestion that disease-causing pathogens such as Dengue fever and Zika virus can be transmitted through the female mosquito’s saliva.

One of the byproducts of digesting a large amount of blood is ammonia. Researchers were already aware that Aedes aegypti mosquitoes had efficient metabolic mechanisms to remove eliminate ammonia from their bodies, but they didn’t know how that process occurred.

Co-authors of this study include scientists from The University of Texas MD Anderson Cancer Center in Houston and Israel Institute for Biological Research in Israel. Financial support came from the Corinne Adams Baines Professorship Award and a grant from the National Institutes of Health, National Institute of Allergy and Infectious Disease Grant, Cancer Prevention Research Institute of Texas, and The University of Texas MD Anderson’s NCI Cancer Center Support Grant.