In a study that is the first of its kind, Tulane researchers give pediatricians a road map to treating children with a rare genetic disorder called Gaucher disease. 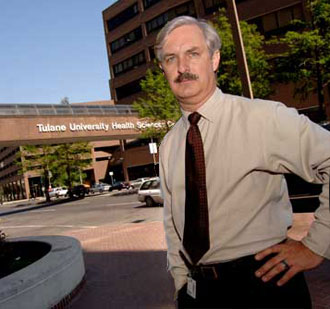 This study is the first that helps pediatricians understand what to expect in their patients with Gaucher disease, says Dr. Hans Andersson, director of the Hayward Genetics Center at Tulane. (Photo by Paula Burch-Celentano)

Enzyme replacement therapy is highly successful in reversing growth deficiency in pediatric patients with a rare genetic metabolic disorder, pediatric Type 1 Gaucher disease, according to a study by researchers at the Tulane University School of Medicine.

The intravenous therapy also has been successful in alleviating other symptoms of the disorder, including anemia, low platelet counts and enlarged organs such as the liver and spleen.

“This study is really the first that gives pediatricians a road map to understand what to expect in their patients,” says lead researcher Dr. Hans Andersson, Karen Gore Professor of Human Genetics and director of the Hayward Genetics Center.

“This is something treating physicians can use to hold up to their patients and say 'How am I doing? How is the patient doing?'”

Gaucher disease is an inherited disorder of metabolism. The disease is caused by a deficiency of an enzyme, glucocerebrosidase, in the lysosomes  a variety of membrane-bound organelle found within every cell of the body. The enzyme is used within the lysosomes to break down large molecules for disposal by the cell.

“When this enzyme is deficient, the process stops and the lysosome becomes dysfunctional, then the cell becomes dysfunctional, and then we get pathology at the level of the organs,” says Andersson. Resulting symptoms include enlarged liver and spleen, anemia, low platelet count and painful bone disorders as well as growth deficiency in children. Patients can be diagnosed with the disease from early childhood into middle age, with most diagnoses coming at around age 18.

Andersson and his collaborators at Children's Hospital of Philadelphia and Genzyme Corp. analyzed data collected by the Gaucher Registry, a database of more than 5,000 Gaucher patients around the world. The database was started in 1991 and is maintained by Genzyme, the manufacturer of the enzyme replacement drug, Cerezyme. Andersson presented the study results at the American Society of Human Genetics annual meeting in Philadelphia in November. The results will be published in the December 2008 issue of the journal Pediatrics.

“Because this is such a rare disease, no single center has more than 50 to 80 patients,” says Andersson. “With so few patients at any one center, the only way we can make really good longitudinal conclusions about therapy for patients is by collaborating, and that's what the Gaucher Registry is.”

Andersson and his colleagues culled through the registry and found 884 patients on which there was pediatric data and some enzyme replacement follow-up data.

“What's important about this study is that this is the first time we have in a large population of pediatric Gaucher patients any sort of longitudinal data,” Andersson says.

Only two previous studies have analyzed pediatric Gaucher patients' response to therapy, according to Andersson. One study with 33 patients looked at about five years of data and the other had only 12 patients, and examined a mere 12 to 36 months of data.

By contrast, the Tulane study looks at data gathered over a 15-year span from 884 patients. One striking benefit described by the study is that patients who receive therapy for several years achieve normal or near normal growth. “And in general, the liver and the spleen size get very much better,” says Andersson. “Anemia generally gets resolved within a year or two, and platelet counts get much better.”