Studying on the Run

Cramping fingers are not an issue for note-taking Tulane University students now that a growing number of professors are uploading class lectures onto the Internet. Students have the option of downloading audio files, also known as podcasts, to personal computers or mp3 players for studying while on the go. 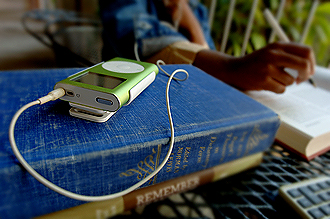 “The truth is, a lot of students aren't very good at note-taking and this gives them a chance to go back and review the material after class,” says Susann Lusnia, an assistant professor of classical studies who uploads her Roman Art and Archaeology course lectures to the Internet. “I've found it to be a good way to provide study materials for the students.”

During class, the professor wears a digital recorder and later uploads the lecture onto the university's MyTulane Internet server. Students enrolled in the course are then able to download the audio files.

Lusnia continued podcasting her lectures after participating in the university's pilot program conducted in 2006 by the Tulane Office of Technology Services.

The technology was first introduced as “course-casting” and was found to be a valuable tool for the professors and students who participated. Since then, professors like Lusnia continue making their lectures available with one warning to students.

“I try to remind the students that they should never rely on the podcasts because there have been days when I forgot my recorder and other days when the battery would die in the middle of a lecture,” says Lusnia. “There is no substitute for actually being in class, participating in the discussions and being able to see the slides together with the lecture. The podcasts are mostly for reinforcement.”

In a blind survey conducted by Lusnia, she found that approximately 25 percent of her students used the podcasts for missed classes, but the majority used the podcasts to fill in gaps in their notes or to prepare for a test.

“Another interesting thing that I found through the survey is that most students are listening from their computers and not from an iPod as you might suspect,” says Lusnia.

Derek Toten, director of instructional media for Tulane technology services, says that there are still professors who are concerned about whether podcasting affects class attendance and the difficulty involved in recording and uploading lectures.

“We expect the number of participating professors to grow,” says Toten. “Podcasting has become so popular at other universities that we expect our professors will begin to see the intangible value in using the service.”

As for the difficulty involved in the process, Lusnia says there's little to none.

“It's no big deal really,” says Lusnia. “It's as simple as remembering to bring the recorder to class and remembering to turn it on before the lecture begins.”