Holocaust survivors who call New Orleans home tell their emotional stories in a video documentary series available online and compiled by the Southern Institute for Education and Research at Tulane University. 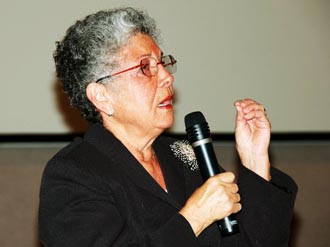 Anne Levy, a survivor featured in the Holocaust documentary, has helped the Southern Institute by speaking at educational workshops. (Photo by Sally Asher)

“Ten Stories of Holocaust Survivors in New Orleans” features 10 survivors in separate, 30-minute, one-on-one interviews with Plater Robinson, education director of the Southern Institute. The interviews also include accounts of the survivors' experiences with racial segregation when they first arrived in New Orleans in the 1950s and their reactions to the political campaigns of former Klan leader David Duke.

In September 1939, when Anne Levy and her younger sister, Lila Millen, were 4 and 2, the Nazis attacked Poland. In the documentary, the women describe their childhood experiences trying to grasp the seriousness of the war. They recount memories of life in the Warsaw ghetto, facing starvation and pretending to be Christian in order to survive.

In Levy's interview she describes their family apartment, which stood across from the community temple, and recalls the moment she first recognized that something was terribly wrong.

“My first memories of the beginning of war are when everybody in the house was very upset and crying and looking out the window,” says Levy. “There was a large Reform Orthodox temple across the street and everybody was upset that the Germans were taking out all the prayer shawls and prayer books and putting them in a heap in front of the synagogue to torch them.”

The video documentaries are available for download at no charge from the Southern Institute website. The site also offers the option to print out transcripts of the interviews along with study guides and answer keys for teachers who wish to use the videos as instructional tools in the classroom. Educators in Louisiana, Mississippi, Alabama and the Florida panhandle can obtain free copies of the three-disk DVD set through the website.

The general public can purchase the DVD set through the site for $10 or at Octavia Books in New Orleans.

The institute's goal is to improve ethnic relations in the South through education training, says Robinson. In keeping with this goal, it was important to record the interviews and make them accessible to anyone who is interested, he adds.

“The best way to teach is to be a courier of words for the people who lived through these parts of history,” says Robinson. “In order to properly relay their stories, we have to leave ourselves out of it completely and that's exactly what the videos do.”

Other Holocaust survivors featured in the documentary are Martin Wasserman, who was forced into working as a laborer at a Nazi weapons factory in Poland; Jeannine Burk, whose parents left her in the care of a Christian women in order to dodge the Nazi death camps; and Felicia Fuksman, a nurse who survived a Ravensbruck concentration camp.

Eva Galler was one of 20 surviving Jewish people in Oleszyce, Poland, after attacks that wiped out the entire Jewish population of the town; Dora Nederman lived in a region of Czechoslovakia annexed by Hungary, a Hitler ally; and Sigmund Boraks was allowed a “work pass,” thus exempting him from being sent to the Treblinka death camp. Isaac Niederman, a 15-year-old in 1939, recalls how Jews were beaten and forced into ghettos; and Shep Zitler, who was drafted into the Polish army, recalls his later capture near Warsaw by the Germans.

Funding for production of the series was provided by the Rita and Harold Divine Foundation and the Siggy Boraks family.

For more information on the Southern Institute and the Rita and Harold Divine Documentary Series, visit www.southerninstitute.info.