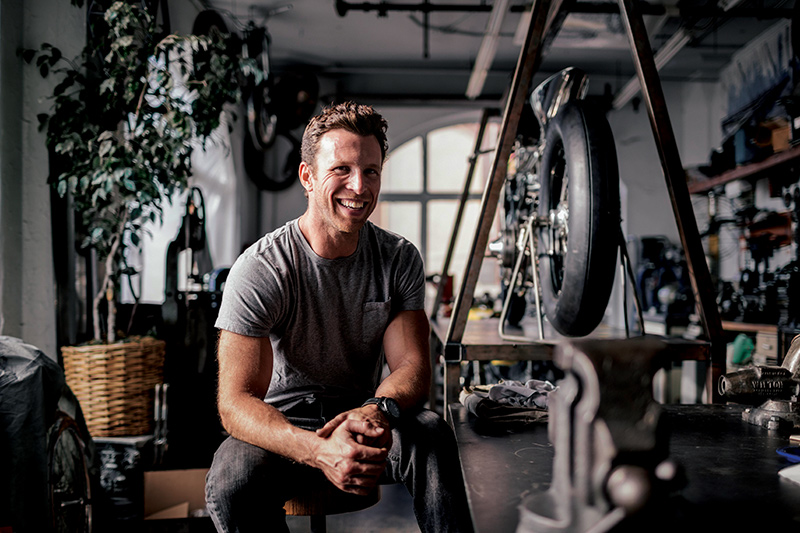 As the founder of Hazan Motorworks, custom motorcycle designer Max Hazan has carved out a career as a mad scientist of machinery. Each of Hazan’s one-of-a-kind creations are handcrafted in his downtown Los Angeles studio.

“I usually have a backlog of potential projects in my head. It all starts with a unique engine,” said the Tulane College alumnus.

Hazan then begins a months-long building process, sculpting metal parts and suspending them on his workbench before sketching the motorcycle’s final design.

“It all starts with a unique engine.”

“The wheels are the only parts that I don’t make. One hundred percent of the other pieces are built here,” he said.

Hazan first began building bikes in 2011 when he was sidelined by an off-road motorcycle crash.

The Long Island, New York, native majored in psychology at Tulane and noted that his family has multiple ties to the university. One brother, Alec Hazan graduated from the A. B. Freeman School of Business in 2016, while another, Kevin Hazan, is currently a second-year student.

“I wound up breaking a leg, so I was couch-bound for a long time,” he said. “Looking to pass the time, I put an engine in this beach cruiser bike that I had.”

Hazan completed the construction faster than expected, so he decided to add some motorcycle parts to the vehicle.

“It initially wasn’t something that I had planned to do for a living. My dad gave me the push to do it,” he said.

Supporting his son’s passion, Hazan’s father encouraged him to take a year off from his full-time job to pursue motorcycle design as a career.

Hazan opened a workshop in Brooklyn, New York, in 2012. The mechanical maestro’s first custom design appeared in the motorcycle publication Pipeburn and won its 2013 Bike of the Year Award. Hazan also took home the award in 2014 and 2015.

During the episode, Bourdain talked shop with Hazan while he molded parts for his latest project.

“It was challenging to capture the motorcycle build process within two days, but it was fun,” said Hazan.

Hazan says he frequently receives requests for guidance from craftsmen hoping to start their own careers building custom bikes. When answering the inquiries, Hazan stresses the importance of originality.

“I don’t look at other motorcycles for inspiration. Push yourself to do something different in order to separate yourself from the pack. That’s what has worked for me.”