Symposium on the Essay Is Personal

Though Freeman Auditorium on the Tulane uptown campus was full on Saturday (Oct. 3), the discussion was intimate. Students, faculty and community members joined authors Jonathan Ames, Meghan Daum, Phillip Lopate and Chris Rose for "Less-than-Secret Lives: A Symposium on the Personal Essay." 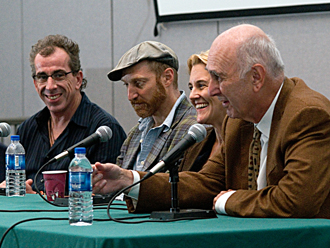 Each author read a selection of pieces and participated in a brief on-stage interview with a faculty member before taking questions from the audience. The event, presented by the Creative Writing Fund of the Department of English, concluded with a panel discussion featuring all four authors, moderated by Thomas Beller, assistant professor of English.

Beller called the panel "illuminating," saying, "I was so interested to hear these accomplished writers tease out their thoughts on the personal essay, and the way they each write, think, work and live."

Merely defining the personal essay  and the distinctions between it and autobiographical fiction and memoir  could have consumed the entire six-hour event.

Daum, a novelist, essayist and weekly columnist for the Los Angeles Times, rejects the term "memoir" for her non-fiction work, favoring the term "essay." The difference for her, she explained, is an "intellectual hook," a thought-provoking idea that is part of a universal theme. Lopate, a distinguished essayist, poet, movie critic and novelist, echoed Daum, saying he likes to use his own personal experience to "fetch some larger idea."

The authors also discussed the level of truth in their non-fiction, a perennially interesting question for writers and readers of the genre. Lopate and Rose, a Times-Picayune columnist, maintained that they don't invent anything, but with Daum and Ames, author of both fiction and nonfiction books, the verdict was slightly less clear.

Ames said, "Fiction is glorious  you can take life and change it around." He noted that parts of life too personal for essays sometimes find their way into his fiction.