Innovation is always a hot topic in business, but with the Obama administration's ambitious agenda and the promise of increased government spending on science and technology, innovation is an even more timely topic for this year's Burkenroad Symposium on Business and Society on Friday (March 6). 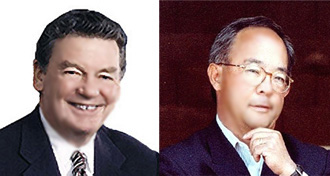 Among the guest speakers for the Burkenroad Symposium on Business and Society will be author and technology consultant Robert M. Price, left, and venture capitalist Patrick J. Yam. (Photos provided by the Burkenroad Institute)

“I'm very interested in the intersection between innovation and leadership,” says Laura Cardinal, director of the Burkenroad Institute and organizer of the symposium, to be held in Dixon Hall on the uptown campus from 10â“11:30 a.m. “Innovation is a very broad, multidisciplinary problem. It requires different perspectives, and because it touches so many aspects of life, we very much wanted to get speakers that were involved with innovation in different ways.”

To address this intersection of innovation and leadership, Cardinal sought a wide range of speakers, including executives from technology- and innovation-oriented companies as well as representatives from both public- and private-funding sources.

Robert M. Price is president of PSV Inc., a consortium of consultants specializing in technology commercialization and corporate strategy. He also is the former CEO of Control Data Corp., which during the 1960s became a pioneer in field of supercomputing. Seymour Cray, often called the father of supercomputing, founded his company Cray Research after designing a series of computers for Control Data. In his book The Eye for Innovation, Price outlines principles for managing innovative enterprises based on his experience at Control Data.

Patrick J. Yam is founder and chief executive officer of Sensei Partners, an early stage venture investment enterprise that helps young software companies accelerate their time to market and value creation. Yam brings to the firm a unique perspective developed through experience on Wall Street, at the Federal Reserve and with venture capital.

Albert Johnson is senior analyst in the office of the chief technology officer at Corning Inc. In that role, Johnson oversees Corning's funding of university-based research, an important component of the company's research and development efforts.

Arden L. Bement Jr. is director of the National Science Foundation, which each year awards more than 10,000 grants to fund specific research proposals that have been judged the most promising by a rigorous and objective merit-review system. The NSF serves as the funding source for approximately 20 percent of all federally supported basic research conducted by America's colleges and universities. As director, Bement manages its $6.06 billion budget.

“People tend to think that innovation is all about high tech, but eBay was an innovation not because it was online, but because of how it connected sellers and buyers, creating infinite niche markets,” Cardinal says. “Wal-Mart's supply and distribution system was an innovation that changed the entire retail industry as well as ushering the advent of big-box retail stores that disrupted traditional department stores. I very much hope attendees walk away from the symposium thinking about innovation in a broader way.”

The Burkenroad Symposium is free of charge and open to the public. It is sponsored by the Burkenroad Institute, which is part of the A. B. Freeman School of Business.