Tales from the barbershop 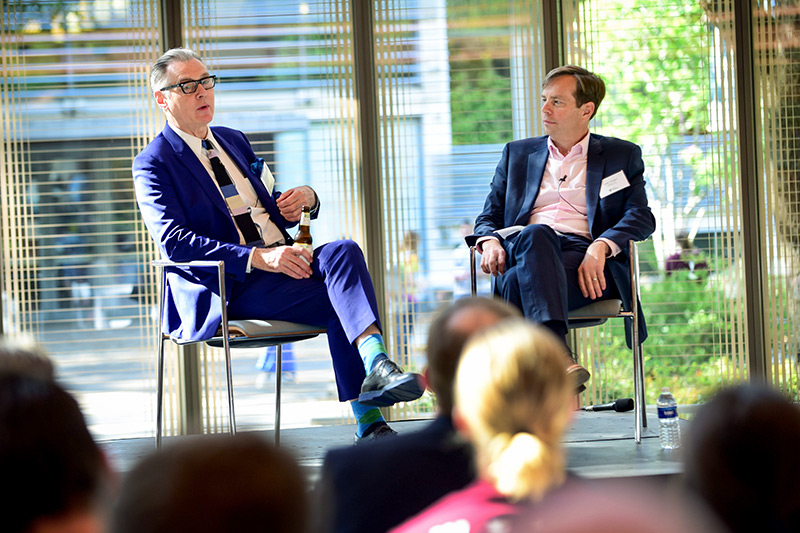 Famed barber and entrepreneur Aidan Gill, left, is interviewed by the CEO of the Olinger Group, Jude Olinger, at the A. B. Freeman School of Business. (Photo by Cheryl Gerber)

“It was like Angela’s Ashes,” he quipped, “without all the money and fun.”

On Monday, March 19, Gill discussed his 50-year career during a special New Orleans Entrepreneur Week talk hosted by the Lepage Center for Entrepreneurship and Innovation at Tulane University’s A. B. Freeman School of Business.

“There’s an old Irish saying—jobs are like lobster pots. They’re really easy to get into, very hard to get out of.”

“We wanted to highlight an outstanding small business in New Orleans, and Aidan Gill fit that bill perfectly,” said Rob Lalka, executive director of the Lepage Center. “It was great to hear his story and learn his thoughts on building and sustaining a business.”

In a conversation with Jude Olinger, CEO of the Olinger Group and a longtime customer and friend, Gill described his impoverished upbringing in Dublin and his decision to forgo the promise of a scholarship to Trinity College to become an apprentice barber at the age of 16. His reason? He needed money to buy a second pair of shoes.

“There’s an old Irish saying,” Gill said. “Jobs are like lobster pots. They’re really easy to get into, very hard to get out of.”

After emigrating to New Orleans, Gill opened his first store in 1990 in a tiny space just off Maple Street. Nine years later, he moved to a larger space on Magazine Street, which remains his flagship location today.

From the beginning, Gill had a clear entrepreneurial vision. An aficionado of barbershop history, he equipped the store with antique furnishings and memorabilia to evoke the profession’s past.

Gill’s latest undertaking is his own line of personal care products. He worked with a chemist for three years to develop Aidan Gill for Men shave cream, shampoo and after-shave balm.

Looking back on his career, Gill was careful to avoid taking too much credit for his success.

“People think they make their luck. You don’t make your own luck,” said Gill. “You do it every day, and 50 years later, you look and go, ‘Well, that wasn’t too bad.’”