Fifty students listened as a rabbi from Jerusalem read a blessing in Yiddish and then began to interpret a parable. The scholar guided students in the Tulane Jewish studies course through the teachings of a revered 19th-century master of mystical storytelling. 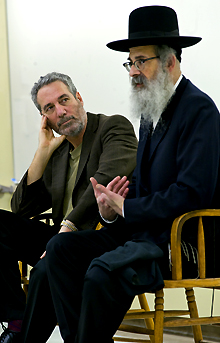 Rabbi Ozer Bergman was the guest scholar during a class of an innovative course titled “Building Jewish Identity: Secular Judaism in Historical Perspective,” and has spent decades studying the work of Rabbi Nachman, one of the most creative and influential of the Hasidic masters.

Throughout the semester, students will contrast Nachman's stories and parables with the writings of Franz Kafka, a 20th century secular writer whose enigmatic stories have sometimes been related to Jewish mystical teachings.

Students are learning to appreciate the continuity of the parable and other Jewish literary forms in both religious and secular texts, says Rodger Kamenetz, a visiting professor who is teaching the course. Under consideration is the particular flavor of religious writing with literary form as opposed to that of literary writing with religious content.

“I want the students to learn how to read stories with greater depth. The Jewish tradition is midrashic, that is, it is all about reading and interpretation, and the stories of Rabbi Nachman and Franz Kafka present extreme opportunities for creative interpretation,” Kamenetz says. “They will learn to understand and appreciate how Jews approach the problem of interpretation.”

Kamenetz is the author of nine books, including The History of Last Night's Dream: Discovering The Hidden Life of the Soul (2007), a book featured on Oprah Winfrey's “Soul Series” webcast, and Stalking Elijah, which received the National Jewish Book Award for Jewish Thought.

He also wrote The Jew In the Lotus: A Poet's Rediscovery of Jewish Identity in Buddhist India, which chronicles his trip to Dharamsala, India, for a meeting between the Dalai Lama and eight Jewish delegates. Kamenetz is the founding director of Louisiana State University's master of fine arts program in creative writing and the founding director of the LSU's Jewish studies program.

Kamenentz wants his students to explore four levels of meaning that exist in stories  plain, allusion, allegory and secret.

“Rebbe Nachman wasn't a writer  he was in the business of helping people reach their highest potential,” guest scholar Bergman told the students. “After trying lectures, he tried a different method  stories. You will find instruction in any text you read.”

Bergman, a scholar with the Breslov Research Institute, has studied Nachman for more than 30 years.

The course serves as the “core course” for a curriculum in secular Judaism, which is available through the Tulane Jewish Studies Program and at only 20 other colleges and universities across the country. The Posen Foundation's Center for Cultural Judaism has funded this initiative.