Talking About the Hip-Hop Generation

Tough questions about healthy relationships and HIV are being answered for sixth-grade students at Langston Hughes Academy Charter School by Tulane students enrolled in the course, “Hip-Hop, HIV/AIDS, and African and African Diaspora Studies.” 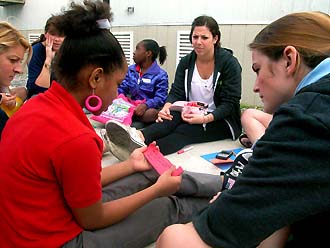 At Langston Hughes Academy, a sixth-grader reads a question drawn from the “anonymous question box" while Tulane students listen. The mentoring project is a collaboration between the school and the Tulane Center for Public Service. (Photos by Alicia Duplessis)

The 42 Tulane students enrolled in the course this semester are reaching out to the younger students, discussing with them, among other things, media images of hip-hop and the dire consequences of HIV, which can lead to AIDS.

The course, created and taught by Nghana Lewis, assistant professor of English and African and African Diaspora Studies, was first offered in 2006 to a class of six.

Since its initial offering, the course has grown in popularity among Tulane students interested in the significance of the hip-hop generation  a designation for people born after the end of the civil rights movement.

“People unfamiliar with hip-hop tend to interpret it superficially, either positively or negatively,” says Lewis. “In truth, hip-hop is a complex network of tools, resources and methods, including a variety of expressive art forms like music, dance, graffiti and the spoken word.” Hip-hop is about strategic coalition building, community organizing and social activism, says Lewis. It speaks for groups typically viewed as voiceless or not having much of importance to say.

The two-and-a-half-hour class sessions on Tuesdays are part lecture by Lewis and part group activities in which the Tulane students compile audio and visual aids with age-appropriate information to present to the sixth-grade students, whom they visit later in the week. Among the topics of discussion are negative impressions of the hip-hop generation and ways to improve that harmful reputation.

The Tulane students are given a platform on which to log about the course and their experiences with the sixth-graders. 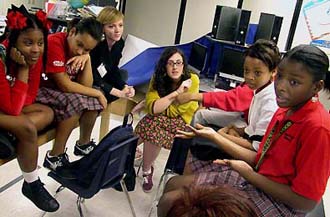 A discussion between Tulane students and sixth-graders may range from healthy body image and self-worth to HIV/AIDS concerns. Tulane students work twice weekly at the school as part of their class, “Hip-Hop, HIV/AIDS, and African and African Diaspora Studies.”

The course fulfills part of the Tulane public-service graduation requirement.

By viewing and discussing how young men and women are portrayed in mainstream hip-hop video, the Tulane students can frame conversations with the younger students about things such as healthy body image and self-worth, says Lewis.

The sixth-grade students participating in the group discussions are members of the Langston Hughes Academy'S D.R.E.A.M. program (Dare to Remain Educated and Motivated).

The program was created by Kwame Floyd, a fourth-grade math teacher and Teach for America corps member at the school. Floyd says that without the Tulane students, his program would have been much more difficult to realize.

“My idea was to create a culture for our students that introduces them to college early in their lives,” says Floyd. “Tulane has made the program more sustainable and efficient by providing a constant flow of college volunteers that our students can look to and say, 'college can be cool.' ”

Floyd says that the mentoring and health-education format of the hip-hop group discussions meets the state of Louisiana'S mandate to teach abstinence-only sex education.

“If your students watch MTV or BET, they have been exposed to far more than what we are talking about here,” he says.