In the wake of Hurricane Katrina, many saw the widespread rebuilding effort as an opportunity to reinvent New Orleans as an environmentally sustainable city. Global Green USA, a national environmental organization, mobilized resources to create the “Healthy Homes and Smart Neighborhoods” initiative. Matt Petersen, president, CEO and board member of Global Green, was on the Tulane uptown campus on Friday (April 3) to address the Tulane Law School Summit on Environmental Law and Policy. 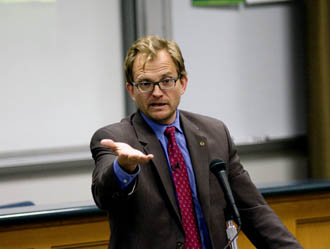 Global Green's Matt Petersen discusses the state of environmentalism, including New Orleans' efforts to rebuild as a “green city,” at the Tulane Law School Summit on Environmental Law and Policy on Friday (April 3). (Photo by Ryan Rivet)

Global Green has several major projects under way in the Crescent City area, including the New Orleans Sustainable Design Competition, the NOLA Green Schools Initiative, and ongoing work with Habitat for Humanity to create more energy-efficient housing throughout the Gulf Coast. New Wave talked with Petersen about the city's progress in rebuilding green as well as the future of environmentalism. Here are highlights of the interview.

NEW WAVE: Do you think New Orleans is falling short of the goal to reinvent itself as a “green city” following Katrina?

MATT PETERSEN: I think it has taken longer than many had hoped, but I think it also has to do with the economy. A lot of big projects that were going to be green, like the World Trade Center redevelopment, were about to take off when the economy collapsed. Unfortunately, there is a failure to get federal dollars where they need to be and a failure of the economy just at the time when we need to accelerate things.

The thing I am always struck by when I leave New Orleans is the will of the people who live here. That's why we made a commitment early on to help rebuild -- the people who love this community and see its unique role in this society as a cultural leader, as an iconic world city. That's why it's so important to see this city built as it should be.

NW: Louisiana offers one of the most generous tax incentives for home and business owners who install solar technology, and still there is little activity. Why do you think accounts for this?

MP: I think there are three reasons. One is awareness. I don't think people know what incentives are available to them. The second is capital. Even with the tax credit, they need to be able to access some sort of financing to pay for those improvements to their home. Third, we need more leadership from the city.

NW: “Green” has become a sales pitch. Has the idea of environmentally friendly business been co-opted by big business to “greenwash” practices that are pretty unfriendly to the environment? And if so, does that diminish the efforts of legitimately green businesses?

MP: I think some in the corporate community are enlisting greenwashing to help their cause. If you're not a informed consumer, you might believe those claims. As we consumers become more sophisticated, I think we will be better able to discern those claims and the corporations will be less able to do that. I think the other thing that is going to change is our regulatory agencies will start regulating those claims more closely. I also think there are a lot of companies out there doing the right thing, and we don't want to take that away. We need to be able to become more informed  not only as consumers, but as citizens. Our choices are not only about what we buy, it's about which politicians we vote for, about the questions we ask of those elected officials.

NW: Where do you see the environmental movement going?

MP: I think we're going to see it integrated into every aspect of our lives. The environment is not just an issue, it's a central organizing principle. If we continue to categorize it as something separate, our quality of life is going to suffer and, more than that, our ability to survive on the planet as a species is going to suffer. The more we can recognize that it is in our self-interest to leave a reasonably healthy planet behind for future generations, the more the environment is going to be a driver.