Thousands of protesters staged “tea parties” across the country on Wednesday (April 15) to voice both anger and concern about government spending, the growing federal deficit and Obama administration policies. It is a trend that one Tulane sociology professor expects will persist as long as the economic forecast remains bleak. 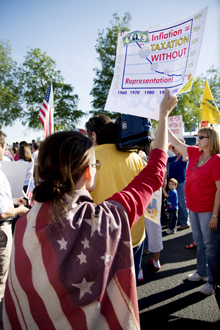 It's a new spin on the old message of “taxation without representation.” Citizens gather in Metairie, La., to protest government spending and the growing federal deficit. (Photo by Ryan Rivet)

“If the economy continues to sour in the coming years, these things will mushroom and become more popular,” says Kevin Gotham, associate dean of academic affairs for the School of Liberal Arts and a sociologist. “If the economy gets better in the next year or two, I think you will see these types of protests fizzle out.”

The burgeoning tea party movement staged protests in an estimated 700 cities and towns on tax day and has grown from what Gotham says was originally a grassroots movement responding to frustrations over economic woes.

“While there are people organizing because they are frustrated, they are also being led by powerful national groups allied with the Republican Party,” Gotham says. “I think [the tea parties] are expressions of genuine grassroots discontent, but I would say they are neither spontaneous nor organic.”

While the message is coalescing around economic issues, Gotham argues that the political partisanship is at play as well.

“It's not just about anti-tax or anti-government spending,” says Gotham. “It's about people feeling that they're disenfranchised from government now. I think there are very strategic promotional points being targeted at middle-class and working-class whites to try to make them feel they are the victims of the stimulus bill.”

Gotham disagrees, however, with the claim that conservative media usurped the idea of the tea party rallies, saying that it is unfair to accuse Fox News for latching onto a movement that appeals to conservatives.

He says that if the roles were reversed, there would likely be similar events held by Democrats in protest of a Republican administration.

Gotham also points out that public display of discontent during times of economic strife are not unique to the United States.

“These kinds of grassroots expressions and economic frustrations are going on in Europe right now as well. The same types of themes we're seeing here are happening there.”

He adds that the swelling ranks of the discontent will make their mark on the future elections if there is no significant improvement in the economy.

“At the end of the day, people vote with their pocket books. If the economy is not doing well, it does not bode well for any incumbent.”