From 1964 to 1999, Green Wave football comprised the passion, dedication and effort of 10 head coaches, hundreds of student-athletes, scores of trainers and assistant coaches  and one Lurlyn Fitzpatrick. For the 35 years that she was secretary for Tulane football, “Ms. Fitz” played a central and indispensable role in the program. 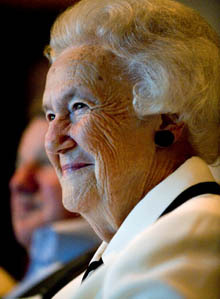 Ms. Fitz  Lurlyn Fitzpatrick  leaves a legacy of caring for her “boys” on the football team. The Tulane athletics department has established an endowed scholarship fund in her honor.

In honor of Fitzpatrick's legacy, the Tulane athletics department this month launched the “Ms. Fitz Football Endowment Fund.” More than 75 former football players as well as the 90-year-old Fitzpatrick and her family attended a series of events held on Nov. 14 and 15.

“I learned very quickly that the history of Tulane football is incomplete without Ms. Fitz,” said Bob Toledo, head football coach for the Green Wave.

Throughout her career with the team, Fitzpatrick remained the constant in the football office. The student-athletes who played during her time refer to themselves as “Ms. Fitz's Boys,” and she was often looked upon as a motherly figure during a crucial time in their lives.

“During my time with Tulane football I acted as a surrogate mother to so many of the guys,” said Fitzpatrick. “I have so many wonderful memories and I would not have replaced my time there for anything in the world.”

“Ms. Fitz meant so much to all of the hundreds of players that played for the Green Wave during her time. She was the mother that listened to our problems, showed us support and helped us get through those lonely days away for the first time from our families. She worked tirelessly for all of us and never expected anything from anyone,” said Bobby Duhon, a Tulane standout from the mid 1960s and a member of the Ms. Fitz Fund committee.

The committee announced that nearly $100,000 already has been committed to fund the endowment10 percent toward its goal of raising $1 million. The interest from the endowment will be used to directly benefit the football program.

The committee also is working on compiling an oral history of the “Ms. Fitz Era,” archiving stories and recollections told by Ms. Fitz and many of the players. More information can be found by visiting the website at www.msfitzfund.com or by calling the Tulane Athletics Fund at 504-865-5356.