Teaming Up for Post-storm Progress

It's a recipe for post-storm progress  take a collaborative group of architecture and business students, add in supportive faculty members, and the result is an innovative project in a New Orleans neighborhood determined to rebuild. 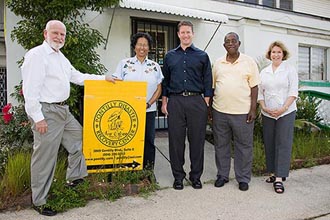 They produced an architectural design and business development plan for a senior community of 127 assisted- and independent-living units to be located on the edge of the Bartholomew Golf Course in the historic Pontchartrain Park neighborhood.

In taking third place, the Tulane team members won $10,000 to be given to their nonprofit partner in the endeavor, the Pontilly Disaster Collaborative, which represents the neighborhoods of Pontchartrain Park and Gentilly Woods that were devastated in the wake of Hurricane Katrina.

“The post-Katrina environment at Tulane makes these collaborations desirable and possible,” said Carol McMichael Reese, associate professor in the School of Architecture, who helped piece together the campuswide collaboration. “We were absolutely thrilled.”

Reese, who also is the Harvey-Wadsworth professor of Urban Affairs, praised the key roles of campus collaborators including the Tulane Center for Public Service and architecture colleagues E. Eean McNaughton, professor of the practice, and Grover Mouton, adjunct associate professor and director of the Tulane Regional Urban Design Center. McNaughton and Mouton taught a design studio for the architecture students who worked on the project. 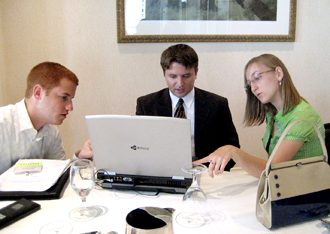 Working on their final presentation to judges at the Chase Competition are, from left, students Alex Landau, Matt Davey and Katie Champagne. Landau and Champagne are architecture students, and Davey is a business student. (Photo by Carol McMichael Reese)

In order to compete, the Tulane team had to produce a design and a business plan to implement the design. Their winning project was entitled “High Community Returns for an Elder Residential Development.”

“It had to be a collaboration,” Reese said. “We're the only school in the area that has both architecture and business schools.”

Before the storm, the Pontilly area had a relatively high percentage of elderly homeowners, many of whom had bought their first houses there after Pontchartrain Park opened in 1955 in segregated New Orleans as a “model” neighborhood for middle-class blacks.

The Pontilly Disaster Collaborative will use the $10,000 award as seed money for further development of the Senior Village project, a vital part of the area's rebuilding plan.

Reese said the Pontilly Senior Village “is absolutely key to their recovery,” adding, “That's the population that found it so difficult to rebuild after Katrina. They want to be back in the neighborhood.”

Edward Blakely, head of New Orleans' Office of Recovery and Development, helped to bring the J. P. Morgan Chase Community Development Competition to New Orleans after it had been held in New York for the previous 14 years.