Tears for Life, a company founded by a group of University of Arkansas students to develop a screening tool to detect breast cancer using women's tears, won the grand prize of $20,000 in the business innovation track at Friday's (April 17) Tulane Business Plan Competition, but the company may have picked up an even bigger prize after the competition. 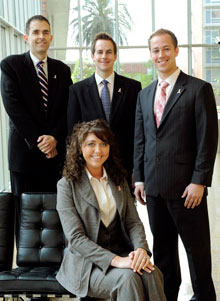 “Three of the final-round judges offered them a deal, which I believe is the first time that's happened,” said Will Donaldson, president of the Tulane Entrepreneurs Association, which organizes the annual event at the A. B. Freeman School of Business.

Donaldson added, “That's big for us because, externally, people will get the idea that if you go to the Tulane competition, these guys mean business. You're liable to get funding if you show strong in New Orleans.”

This year's Business Plan Competition attracted a record 85 entries from universities as far away as Canada, Mexico, India, Sweden and Turkey.

More than 50 first- and second-round judges reviewed entries and selected six finalists to present their plans in person: three in the traditional business innovation division and three in the social entrepreneurship division, which is dedicated to ventures with a social mission. The winning team in each division received a grand prize of $20,000.

Tears for Life was granted an exclusive license from the University of Arkansas for Medical Sciences to develop a patent-pending technology to use protein patterns found in tears as a screen for breast cancer.

If the technology is successful, the company hopes to make future breast cancer screening easier, less costly and less invasive than current methods.

The company impressed investor Gary Solomon, one of this year's judges. “I was amazed that these, I hate to say it, kids got the right to have this product,” Solomon said. “I'm sure the university didn't give that technology license to them lightly, which says a lot for them.”

The grand prize in the Social Entrepreneurship Track went to KAIEN, a for-profit company started at Northwestern University to leverage the unique talents of people with high-functioning autism to provide software testing for the Japanese auto industry.

Keita Suzuki, whose son is autistic, founded the company to meet a demand for highly qualified software testers while at the same time providing high-paying employment for a group that often has difficulty finding work. 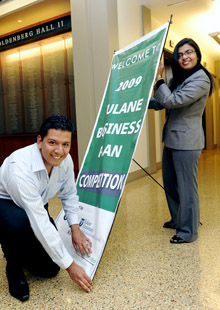 Cesar Solorzano, kneeling, and Nasreen Akter are officers in the Tulane Entrepreneurs Association, which organizes the annual competition.

"The attributes that are important in software testing  things like concentration, strong memory and being very logical  are things that people with high-functioning autism naturally have.”

The judges were quite impressed with the entry. “I think we were all touched by the fact that each of the principals had either a brother or a son affected by autism,” said John Elstrott, executive director of the Levy-Rosenblum Institute at the business school and one of the judges in the social entrepreneurship division.

While the principals of both Tears for Life and KAIEN say the prize money will come in handy, they also say the competition is about more than winning.