Amazing, inspiring and passionate are words that Tania Tetlow's students use to describe the associate professor of law. John Perdew, professor of physics, is recognized for teaching with simplicity, clarity and elegance. For their achievements in teaching, Tetlow and Perdew received the Tulane University President's Awards for Excellence in Professional and Graduate Teaching at University Commencement on Saturday (May 16). 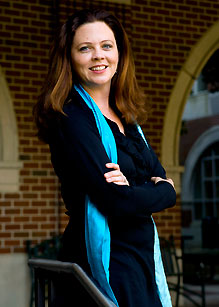 Tania Tetlow is an "amazing" teacher, her students say. The teaching award winner is an associate professor of law. (Photos by Paula Burch-Celentano)

As recipients of the awards, they each received a medal designed by professor emeritus Franklin Adams and a stipend of $5,000.

Tetlow, who has directed the Tulane Domestic Violence Legal Clinic since 2005, has an interdisciplinary perspective.

She facilitates a joint legal-medical domestic violence course, conducts training at the Tulane Medical School and coordinates studies with the School of Social Work, the Department of Sociology, the Payson Center for International Development, and the School of Public Health and Tropical Medicine. In addition, she works to educate the wider community about issues of domestic violence.

“Law students need to learn that good lawyers don't just do their work in the courtroom; they work to try to change broken legal systems with more than litigation,” Tetlow says.

Although the Domestic Violence Legal Clinic has worked with dozens of clients with complicated cases against batterers, Tetlow says that so far she has never had a client whose abuser spent a day in jail. “That's a real eye-opener for law students who need to understand the limitations of the legal system,” she says.

In her teaching, Tetlow provides students with real-world experience. She brings actors into the classroom to perform mock depositions and cross-examinations of batterers.

A student of Tetlow says that the law professor “achieves the rare feat of making the subject matter stay with the students well beyond the final examination.”

Perdew has been a Tulane faculty member since 1977. He is renowned as a leading authority in solid-state physics and is among the 100 most cited physicists in the world.

His paper, “Generalized Gradient Approximation Made Simple,” has been the most cited physics paper during the past 10 years, and he has taught a generation of scientists density-functional theory. 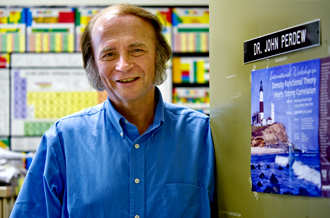 John Perdew, professor of physics, teaches with clarity and elegance, according to his former graduate students.

While this year's award for graduate teaching is the first “pure teaching” honor that he has received, Perdew has long been committed to engaging students in his passion for physics.

“I hope my graduate students learn to love physics, and to think about it with intuitive understanding and clarity,” he says.

“They remind me that there is no bad question  only bad answers. Their questions help me keep my lectures fresh and interesting.”

He says that he begins his classes with simple physics principles, explaining the unfamiliar in terms of the familiar. He focuses on the simplest answers and the simplest limits.

His greatest thrill as a teacher, Perdew says, “is when I get a question so good that it makes me see the subject in a new light.”