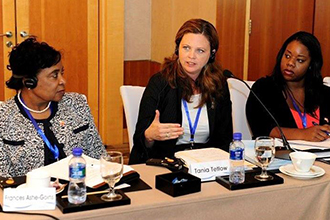 Tania Tetlow, center, discusses domestic violence issues during a panel at the U.S.â“China People-to-People Exchange. She is director of the law school"s Domestic Violence Clinic. (Photo from Tania Tetlow)

The exchange, launched in 2010, promotes discussion and collaboration on topics not typically covered in formal government summits. Richard Stengel, undersecretary of state for public diplomacy, led this year"s event, which was hosted in Beijing and included government representatives, business leaders, academics and media members.

The group conducted talks with the All-China Women"s Federation, a large organization that works to improve the lives of women and girls. The team also visited a women"s hospital, a women"s university, and a juvenile and family law court.

Tetlow gave an overview of U.S. laws on domestic violence, from specific criminal prohibitions to the availability of divorce and civil protective orders. She discussed lessons learned from the American experience about the need to narrow the discretion available to officials, such as police or prosecutors, who too often show hostility toward domestic violence survivors.

China is considering a major reform of its laws governing violence against women and has established pilot projects to use civil protective orders.

Tetlow, director of Tulane Law School"s Domestic Violence Clinic, is a former federal prosecutor who frequently is called on to share her perspective on the legal system, clinical education and methods of combating domestic violence. She also has provided technical assistance with family law clinics in Nanjing, China; Kigali, Rwanda; and Tehran, Iran.