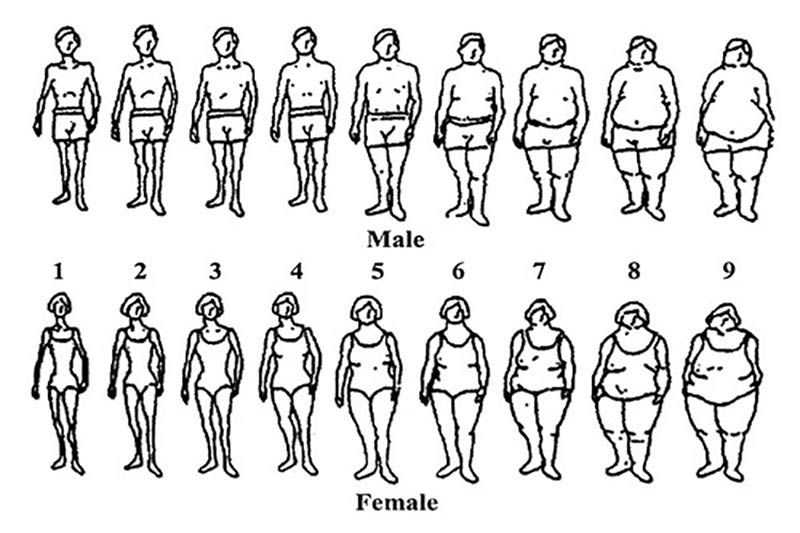 This body image illustration is used to survey people about their perceived body size and body size satisfaction. (Photo from the Tulane Prevention Research Center)

In a study that focused on urban and primarily African-American neighborhoods in New Orleans, more than half of the people in that sample were not satisfied with their body size. The results of the study by the Tulane Prevention Research Center (PRC) were published in Health Education & Behavior.

“A person’s perception of themselves has important implications for personal health,” said Jeanette Gustat, author of the study and investigator with the Tulane PRC. “Low body satisfaction has been linked to health issues such as eating disorders on one end of the spectrum, but also a lack of perceiving the risk of chronic diseases related to obesity on the other end.”

There is a relationship among body size satisfaction, life satisfaction and depression. The more people are dissatisfied with their body, the more likely people are to be depressed, said Gustat, who is also a clinical associate professor of epidemiology at the Tulane School of Public Health and Tropical Medicine.

“Misperceiving weight status can have serious health implications because obesity is related to so many serious and costly chronic diseases. Individuals are not likely to change behaviors if they do not see a problem.”

Conversely, people satisfied with their bodies are more likely to be physically active and have a healthy body mass index.

Researchers at the Tulane PRC surveyed nearly 500 New Orleans adults in 2006 – 94 percent were black residents between the ages of 18-70. The survey asked questions about their ideal body size and their actual body size using an illustration showing a scale of different body sizes to avoid using words like “obese” and “overweight.” When people chose the same figure for both their actual and ideal body size, they were seen as satisfied with their body size.

Less than half of survey respondents (44 percent) correctly chose an illustration that was the same size as their BMI would indicate. More people underestimated their size than overestimated their body size.

Other notable findings include:

The survey was part of the Partnership for an Active Community Environment project, led by the Tulane PRC and funded by the Centers for Disease Control and Prevention.