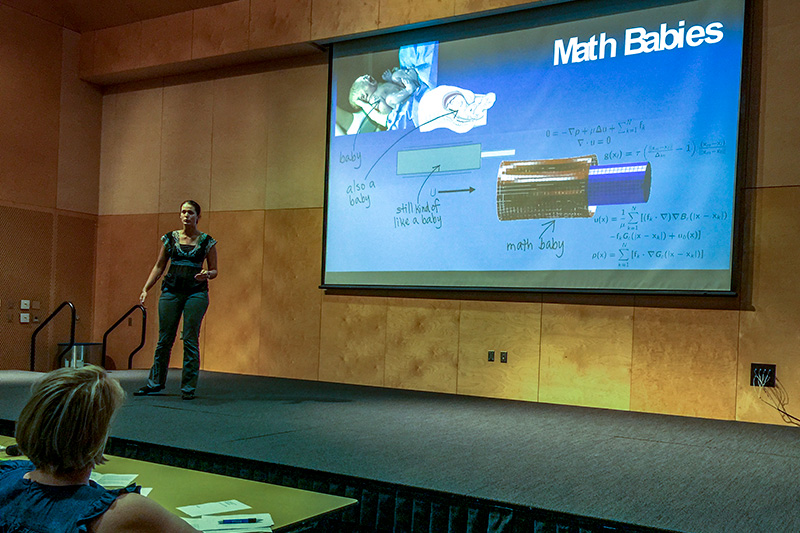 Roseanna Gossman, a doctoral candidate in the Tulane Department of Mathematics, is the grand prizewinner in the 2017 Three Minute Thesis competition. Her next stop is the regional competition taking place in Fayetteville, Arkansas. (Photo by Alicia Jasmin)

Those were the two rules set forth by Michael Cunningham, Tulane psychology professor and associate provost for the Office of Graduate and Postdoctoral Studies, Wednesday at the start of the third annual Three Minute Thesis competition on the uptown campus.

As the name indicates, doctoral candidates are challenged to explain their research in everyday language, in 3 minutes or less, and using only one PowerPoint slide.

“I signed up because it looked like fun and also because it’s good practice.”

After eight presentations from students in the schools of Science and Engineering, Liberal Arts, and Medicine, judges announced a grand prizewinner and people’s choice winner.

“We’re always told to have a short elevator pitch prepared to easily explain our work,” said Roseanna Gossman, a doctoral candidate in the Tulane Department of Mathematics and the day’s grand prizewinner. “I signed up because it looked like fun and also because it’s good practice.”

Gossman, who said she operates a small petting zoo in her free time, explained how she uses mathematical computations to make predictions on female reproductive health, specifically pertaining to human birth.

The audience voted for Minming Cui, a graduate student in the Department of Earth and Environmental Sciences, as the people’s choice winner.

The goal of Cui’s work is to understand how the distribution of tungsten in the environment has impacted life throughout the history of the earth.

The Three Minute Thesis competition was founded by the University of Queensland to cultivate academic communication skills in students. The first competition was held in 2008 and has grown to include more than 200 universities in 18 countries.

The grand prizewinner of Tulane’s competition will travel to Fayetteville, Arkansas, to compete in the regional competition hosted by the Council for Southern Graduate Schools.

Like this article? Keep reading: Journey begins for new Fulbright scholars at Tulane