For Mark Fox, a graduate student in the Department of Ecology and Evolutionary Biology at Tulane, the impact of severe storms on wetland diversity must be studied at the microscopic level. And, amazingly, he can study this diversity within the city limits of New Orleans, at Bayou Sauvage, the nation's largest urban wildlife refuge. 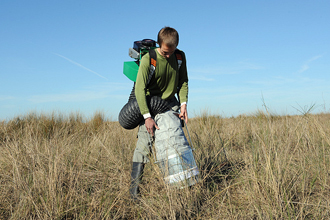 Mark Fox, a graduate student in the Department of Ecology and Evolutionary Biology at Tulane, studies plant stress and diversity of insect life in Bayou Sauvage. (Photo by Sally Asher)

Bayou Sauvage is a wildlife refuge located in eastern New Orleans. It includes 23,000 acres of fresh and brackish marshes and is home to bountiful numbers of fish species, crabs, shrimp, alligators and mammals, large and small, as well as more than 340 bird species. And it is only a 15-minute drive from the French Quarter.

Working through the Coastal Institute at Tulane funded by the U.S. Department of Energy's National Institute for Climate Change Research, Fox and fellow Tulane researchers are examining the ecological consequences of catastrophic flooding by focusing on Brazilier Island, a tract of brackish marsh located on the boundary of Bayou Sauvage.

Under the guidance of Michael J. Blum, assistant professor of ecology and evolutionary biology, Fox is studying the response of marsh insects to flood-stressed plants. At the same time, research professor Alex Kolker and graduate student Kristen Butcher, biogeochemists from the Department of Earth and Environmental Sciences, are investigating the soil. The group's goal is to compare the soil quality and insect life of a healthy marsh to that of a marsh that has been stressed by flooding.

“I take care of all of the aboveground things that are alive, and they test the soil and water chemistry,” says Fox. “As a grad student, it's cool to be able to collaborate with people from another department.”

Fox focuses on a species of marsh grass called Spartina patens. He uses a special vacuum to suck up bugs living in the grass, and he examines cut plant stems to assess the stress level of the plants. Back in the lab, Fox sorts through the vacuum bags and catalogs the diversity of insect life on the marsh.

Their controlled flooding experiment was temporarily derailed by real catastrophic flooding in August 2008, when Hurricane Gustav struck the area.

The research group had set up “donuts” in the marsh, in which they had planned to do controlled flooding. Once the actual storm came through, however, the entire area was deluged by storm surge.

“The experiment was designed where we would perform controlled floods inside the donuts, and we would compare the data we gathered with data from unflooded plots,” Fox explains. “After the storm, there were no unflooded plots."

In the weeks since Hurricane Gustav hit, the researchers have figured out a way to redirect their project.

“Instead of doing it all or nothing  flooding or not  we treated it as a natural experiment. We picked locations on the marsh that had been affected to a greater or lesser degree by the floodwaters. We measured plant stress and insect diversity, and are trying to associate that with the amount of flooding that occurred,” Fox says.

And now, as the group watches the marsh at Brazilier Island struggle to recover, a new opportunity has arisen.

“In January I am going to do some follow-up to the natural experiment,” says Fox. “I'll see how the same sites have recovered since the last time I tested them, and see if there are still detectable differences between hard-hit and relatively undamaged marsh after several months have passed.”

He suspects that there will be long-term, far-reaching effects from Hurricane Gustav, and that the diversity of life at all trophic levels will be diminished or changed.

“Yes, we know that a one-time flooding event is immediately harmful,” says Fox. “But we also think that the structure of the entire food web may change, and the consequences for the marsh ecosystem could be significant and long-lasting."