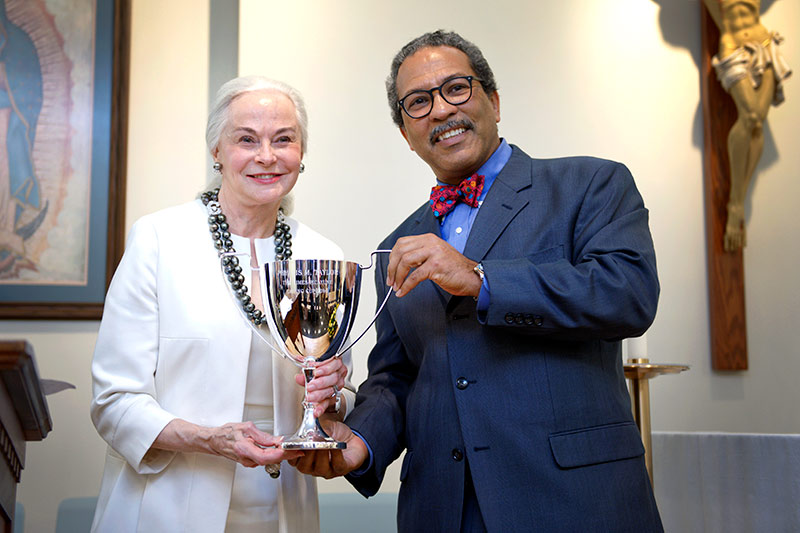 Guests gathered within the Tulane Catholic Center’s chapel on Thursday (Aug. 25) to honor local philanthropist Phyllis Taylor, recipient of the 2015 Times-Picayune Loving Cup for her dedication to the New Orleans community.

“Much has changed about The Times-Picayune since we published our first newspaper on Jan. 25, 1837, but every year since 1901 there has been one constant — the awarding of The Loving Cup,” said Mark Lorando, editor and vice president of content at The Times-Picayune.

“The Loving Cup was established for the unsung heroes who make our community a better place. We’re looking for individuals who have worked unselfishly, and today Phyllis Taylor becomes the 113th recipient of this prestigious honor,” said Tim Williamson, Tulane University alumnus and president of NOLA Media Group.

“She joins a list of people who are synonymous with making New Orleans a better place.”

Discussing past honorees, Taylor said, “I find in them a common thread, an innate drive to make things better. It certainly is a gift, a gift I know I’ve been given.”

Taylor graduated from Tulane University Law School in 1966 and was known for her pioneering spirit as one of only three women within her first-year class.

Currently a Board of Tulane member, Taylor acts as chairman of Taylor Energy Co. and leads the Patrick F. Taylor Foundation, the charitable organization established by her late husband.

“It was pointed out to me that the Loving Cup has two handles — how fitting in my case. I will always look at this award with two handles, and see one being held by me and one by Patrick.”

Flood insurance is essential protection
Strike up the band
Fresh greens
The More You NOLA: Culture Collision
Tulane helps its own and others recover from flood