A study carried out by a multinational team led by researchers at the Tulane School of Public Health and Tropical Medicine offers additional strong documentation that smoking is a significant risk factor for mortality and disease. 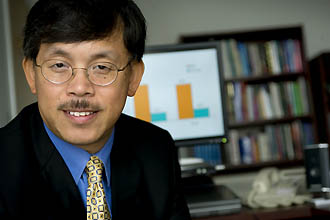 Dr. Jiang He has led a team of researchers tallying the toll of tobacco smoking in China. The principal investigator of the study, he is the chair of the Tulane Department of Epidemiology. (Photo by Paula Burch-Celentano)

The study, published in the Jan. 8 issue of The New England Journal of Medicine, “Mortality Attributable to Smoking in China,” provides an estimate of the number of premature deaths in China in 2005 that were caused by smoking.

“With a population of 1.3 billion, China is the world's largest producer and consumer of tobacco and bears a large proportion of deaths attributable to smoking worldwide,” say the researchers.

According to Dr. Jiang He, principal investigator of the study, these findings have important public health implications.

“Data from our study and others provide strong evidence that tobacco smoking causes an increased risk of cancer, vascular disease and respiratory disease in China and elsewhere,” says He, the Joseph S. Copes, M.D, Chair in Epidemiology, professor of epidemiology and medicine, and chair of the Department of Epidemiology.

The Tulane researchers observed that there was a significant dose-response association between “pack-years” smoked (the total number of cigarettes smoked) and deaths attributable to smoking in both men and women. The team estimated that in 2005, smoking caused a total of 673,000 deaths in China. The leading causes of smoking-related deaths were in the group were: cancer, 268,200; cardiovascular disease, 146,200; and respiratory disease, 66,800.

To estimate the number of deaths attributable to smoking in China, the team conducted a large cohort study in a nationally representative sample of Chinese adults. The investigators examined survey data on smoking and other risk factors collected on 167,871 Chinese adults (83,533 men and 86,338 women) who were 40 years or older. Initial data on the study group was collected by investigators for the China National Hypertension Survey in 1991.

Smokers were defined as those who had smoked at least one cigarette a day for one year or more. Trained staff collected data on their demographic characteristics, medical histories, and life-style risk factors using a standard questionnaire. Follow-up evaluations were conducted with this group in 1999 and 2000.

The Tulane study did report a lower relative risk associated with smoking in China than have some studies carried out in Western populations. This lower relative risk noted among Chinese smokers may reflect differences in smoking patterns in the populations, according to the researchers. Relevant differences probably include the lower numbers of cigarettes smoked in the past as well as the later age of smoking initiation in people currently dying from smoking-related diseases.

This study provides an urgent reminder, concluded the researchers, that there is continued need for strengthening of smoking prevention and cessation programs in China.