Tools for Teaching About Race Relations

A goal of the Southern Institute for Education and Research at Tulane University is to keep alive stories of courage from the civil rights movement. Plater Robinson, education director of the institute, leads the charge by designing study guides and conducting workshops to help high school teachers effectively discuss the history of civil rights in America. 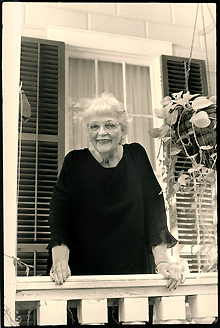 Betty Wisdom, a civil rights activist during the 1960s, stands on the porch of her New Orleans home. Until her death last year, Wisdom made presentations for the Southern Institute's traveling workshops on race relations. (Photo by Plater Robinson)

Robinson is among the institute's presenters available to travel for onsite workshops in high schools in Texas, Louisiana, Alabama, Mississippi and northern Florida.

When Robinson isn't leading presentations, he is traveling throughout the South, especially in northern Louisiana and Mississippi, gathering previously untold stories regarding Southern race relations and building upon his archive of race relations teaching aids.

“All of the South is a museum,” says Robinson as he explains how he finds people willing to recall for him sensitive times in their lives. “You just have to have a little bit of history, know where to go and have a full tank of gas.”

Prior to the mass relocation of New Orleans residents following Hurricane Katrina, Robinson says there was a wealth of information within the city limits.

Once the information, usually in the form of oral histories, is collected, Robinson uses it to compile study guides that the institute distributes  at no charge  during its daylong workshops.

The teaching guides include a synopsis, chronology of events and glossary. “This helps the teachers move the lesson along,” says Robinson. “This way they won't have to go to the library and do research, because as a former teacher, I know they don't have time.”

One of the institute's guides is designed as a companion to the two-hour documentary Eyes on the Prize, an important exploration of the civil rights movement. The guide has more than 200 pages of information, most of it compiled by Robinson. One of the events included in the guide is the story of Emmett Till, an African American teenager who was brutally murdered in Mississippi after allegedly flirting with a Caucasian woman in 1955.

“I have personally interviewed everyone involved in that case including the mother of Emmett Till, his cousins as well as the killer,” says Robinson.

The Southern Institute, founded in 1993, is a nonprofit center dedicated to providing education and communications training for educators. In addition to its free teaching aids related to race relations in the Deep South, the institute has developed teaching materials regarding the Holocaust.

To register for upcoming workshops or to request one of the institute's speakers, contact the Southern Institute for Education and Research at 504-865-6100.