For Charles Figley, an internationally renowned expert in disaster-related mental health, to say New Orleans is fertile ground for research is an understatement. 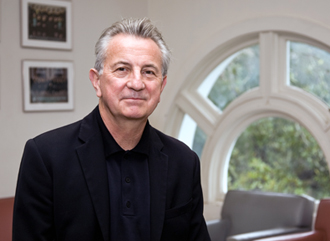 Charles Figley says he is impressed by the vitality and resiliency he has seen in the New Orleans community during its recovery. (Photos by George Long)

“I came here to learn,” says Figley, who joined the School of Social Work this fall as professor of disaster mental health and holder of the Dr. Paul Henry Kurzweg Distinguished Chair.

Figley is one of the country's leading academics on trauma and disasters, having written more than 200 scholarly works on the topic and conducted research on catastrophes ranging from the 1989 Loma Prieta earthquake in San Francisco to the 2004 Indian Ocean tsunami.

He helped found Green Cross, a group of mental health professionals that provides assistance to communities after disasters; was instrumental in establishing the diagnosis of post-traumatic stress disorder (PTSD); and coined the phrase “compassion fatigue” in reference to a condition of secondary post-traumatic stress disorder that afflicts first responders to catastrophic events.

Figley came to New Orleans because of the wealth of opportunities for research in the wake of Hurricane Katrina, which he says is unlike any other disaster in America because of the vast scope of destruction. In most disasters, which typically are limited to a particular area of a city or neighborhood, those directly affected comprise a small portion of the population. In New Orleans, it's the opposite.

“The people that were not affected are the exceptions,” he says. 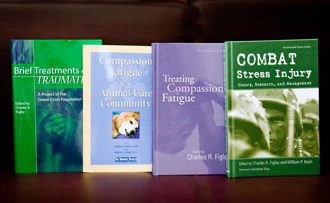 Figley's extensive scholarly work on trauma and disasters includes in-depth explorations of “compassion fatigue.” He also was instrumental in establishing the diagnosis of post-traumatic stress disorder.

The fighting spirit of area residents and their determination to rebuild impresses Figley, who was a professor at Florida State University in Tallahassee for a decade before coming to Tulane.

“What I see as an outsider is the unbelievable resilience of this community,” he says. “It's amazing to me. You have a population who has gone through all these things, and yet the city is vibrant. It is really a testimonial to the chutzpah of the people that live here. I tend to see things in a way that maybe other people don't because I've been to various places that don't come back.”

In coming to Tulane, Figley brought with him a traumatology center he founded at Florida State University, renaming it the Tulane University Traumatology Institute and Psychological Stress Research Program. The institute, which studies the effects of disaster-related psychological trauma, publishes a quarterly journal.

The latest issue is devoted to Tulane and includes perspectives from Tulane President Scott Cowen; Susann Lusnia, associate professor of classical studies; and former social work student Ellen Boyer, as well as School of Social Work instructors and staff such as Fred Buttell, Richard Ager, Judith S. Lewis and Heather Gillis, among others.

“It's about the faculty, students and administrators' experiences,” Figley says. “They tell their stories and then they talk about the lessons learned both from their own personal experiences and their areas of expertise. For example, there is a woman who is a classics professor who compares Pompeii with New Orleans and the lessons that can be applied here.”

The issue comes out in December, but a preliminary copy is available online.

Figley would like to expand upon those testimonials by creating a larger oral-history project involving members of the Tulane community to preserve their accounts of the storm and the city's recovery. Another goal is to broaden the study of trauma at the graduate-school level through interdisciplinary projects with other schools at Tulane. For example, a study on how people respond to the current financial crisis could involve professors and students at both the A. B. Freeman School of Business and the School of Medicine.

“I love interdisciplinary work,” says Figley. “That's what I am going to be focusing on  engaging in conversation with all of my colleagues here about trauma.”